I used an app to crowdsource dating advice from strangers

You'll have to your dating woes in under 300 characters.

As a single 20-something navigating the dating cesspool called “New York City,” I spend a lot of time decoding text messages with my lady friends. Like, a lot of time. It’s certainly an indulgent activity, but there’s something inherently special about these debriefs: Dating involves a lot of rejection and emotional vulnerability, so joking around with your friends about what his text actually means can provide a bit of relief.

When I heard about Jyst, a free app to crowdsource dating advice, I was intrigued. No more waiting for replies from my inner circle telling me how to reply. I could finally take my love of crowdsourcing to the next level!

Users file their problems into categories like “Help! What does his text mean?” and “Is he into me/not into me?” (In other words, Jyst is full of people asking questions with unfortunately obvious responses—and usually, it’s not what you want to hear.) Other users can then react to the question with “yes” or “no” and provide a brief response. It seemed like a quick and easy way to get a variety of perspectives on confusing behavior.

Once I actually used Jyst, though, my attitude changed. I soon began to see the limits of crowdsourcing: As much as I like the concept behind Jyst, the questions have a 300 character limit, which makes it difficult to flush out necessary background information. 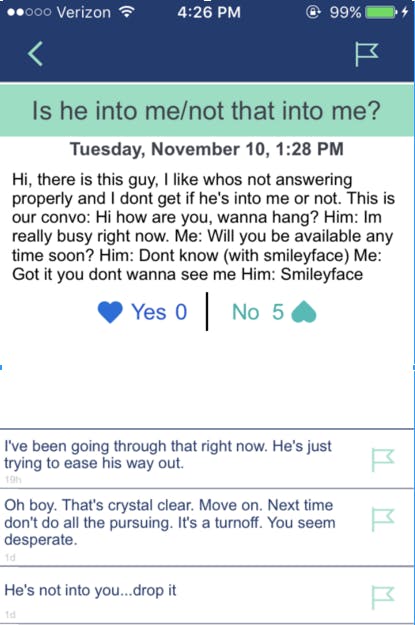 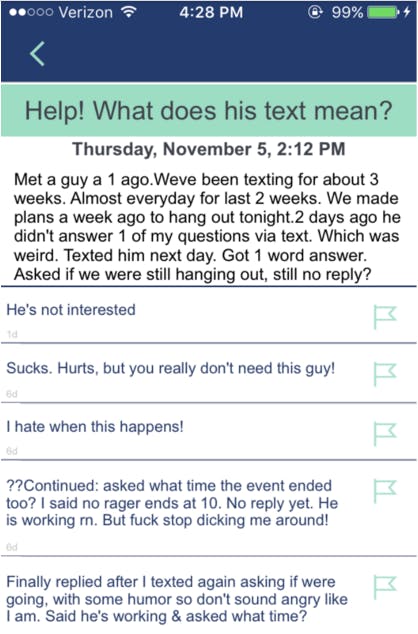 Still, I wanted to test Jyst myself, so I posed the following real question:

“I went out with this guy once and we hooked up. It was nice but intense. We’ve been texting back and forth since. I asked to hang again and he didn’t follow up but we’re still texting occasionally. I know he’s probably not too into me but should I ask him out again? I feel compelled to see him again.” 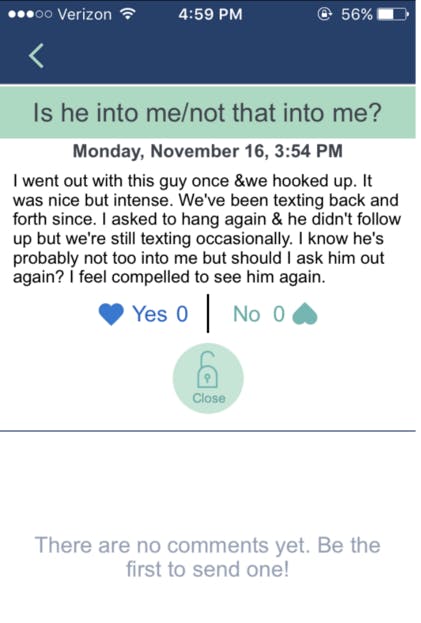 After posting my question to Jyst, I waited two days. I didn’t receive a single response. In order for a crowdsourcing app to work, there has to be a crowd. For me, the app—which was released in October—was a big dud.

Luckily, I have a group of amazing friends who I can talk to about my dating problems. And that’s where Jyst fails: there’s no personalization within the anonymous crowd (if they even show up in the first place). When we ask our friends to decode text messages, we’re asking for an assessment within the context of what they already know about us. My friends know who I am and my romantic history; strangers on an app, “objective” though they may be, know nothing. The beautiful thing about seeking advice from true friends is that it’s a continuation of a conversation we’ve been having for years. They know my patterns and they can illuminate truths. They can comfort me when I feel that small pinch of rejection that inevitably accompanies dating. None of that can be crowdsourced.

(It did occur to me  that there may be people who downloaded Jyst because they are worried about the quality of their friends’ advice— and I would argue they have bigger fish to fry.)

The bottom line is that if we’re going to app to ask a question about whether someone actually likes us, chances are we already know the answer. We’re just not quite ready to admit it to ourselves. Even though I received absolutely zero helpful guidance on Jyst, I went ahead and asked out the guy I’d written my question about for a drink. He wrote back, telling me he’s sick and he has family coming into town. I realize it’s not going to happen with and I’m okay about it.

And truthfully, I didn’t need an app to tell me he wasn’t into me in the first place. I figured that out on my own.