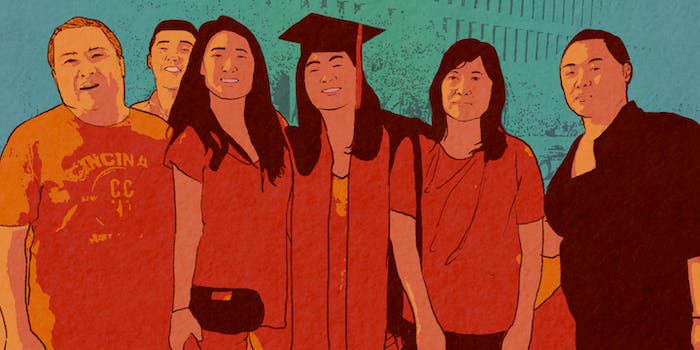 She visited her home country for the first time in 10 years.

Chantal Chang was just about to enter her office on a Friday morning when she received an unexpected phone call from her brother: Her dad had passed away from heart failure.

Most people who receive tragic news take a few days to cope and tend to family. Chang, an undocumented person living in the United States who hasn’t seen her native France in nearly a decade, couldn’t leave without preparing pages of documents and shelling out $1,260 in the process.

“Between getting all the paperwork and having my family ask me when I was coming back, it was so exhausting,” Chang told the Daily Dot.

The next Monday Chang began requesting, receiving, and translating documents from France to take to immigration services in San Antonio. On Tuesday, she spent most of of her time submitting and revising forms. After filing a five-page document and paying a $360 fee, she was granted permission to leave and return to the U.S. under emergency advance parole, one of the nation’s immigration regulations.

This roadblock is one of many Chang has had to deal with since moving to the United States. But despite the challenges, she’s made the life she intended to have in this country. She spends her days offering information on financial resources for students in Austin, Texas, all while pursuing her dream of becoming a pilot. But the unexpected tragedy disrupted her rhythm and forced her to look to the public for help.

Chang clearly remember her last day home in France, July 6, 2006. Chang first arrived in the United States when she was 14 years old to live in Dallas with an aunt whom she barely knew. They didn’t share a language, as Chang only spoke French, and she was berated for not knowing how to speak anything else.

She spent that year motivating herself to study and helping out around the house where her aunt, uncle, and two cousins lived. After her first year, her father asked her to come home, but she was determined to create opportunities that would better serve her family and become a role model for her siblings by going to college.

“I went ahead and told my father that I didn’t want to go back and I needed to finish what I started,” she said. “If I go back to France, it would’ve been for nothing. It just would’ve been a year wasted somewhere else.”

“I just had this epiphany. If I stayed there then I know I’m not going to have a future.”

But the remainder of her stay in Dallas didn’t get any easier. The following years put a financial strain on her aunt because Chang’s parents could not provide any support for their daughter. Chang said she was kicked out of her temporary home during her final year of high school. She then spent the rest of her time in Dallas living in a friend’s home.

This episode did not hinder Chang’s desire to make the most of her experience living in the United States. A school counselor encouraged her to apply for college. Feeling insecure about lacking a Social Security number, she discovered Deferred Action for Childhood Arrivals, commonly referred to as DACA. This program allows undocumented people who entered the country before their 16th birthday and prior to June 2007 to get a renewable two-year work permit. Without this permission Chantal wouldn’t have been able to afford her stay in the U.S.

“It’s made a huge difference,” Chang said. “It really changed the whole game plan as for me thinking about going to France after I graduated.”

Chang moved to Austin to attend the University of Texas at Austin, where she became heavily involved in the University Leadership Initiative, an immigration rights group on campus that provides resources to undocumented students. There she connected with others who had left their homes for similar reasons.

Chang’s life in her home country mainly consisted of watching her family sweat over waiting tables and running Chinese restaurants. She longed for a different future.

“I just had this epiphany,” the 24-year-old said. “If I stayed there then I know I’m not going to have a future.”

Chang couldn’t have predicted that the next international flight she would take would be to her father’s funeral.

Because of the unexpected fees and airfare expenses, Chang’s friend suggested she launch a crowdfunding campaign. She’s not asking for a lot—just the $1,360 to cover expenses—but it still took some convincing to put her needs out there.

“Due to my circumstances I might as well do it because when this happens to someone, you have to ask for help,” Chang said. 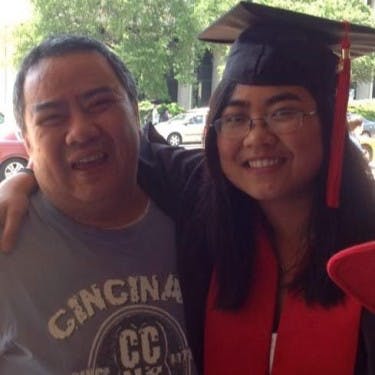 Chang let a friend set her up online, and from there, they waited.

“Having to see Chantal ask permission to travel back to her country of birth, and to see her hurt from the loss of her father who she hadn’t seen in many years is difficult,” the campaign description reads. “But to see her under financial strain because of unjust immigration policy is not tolerable.”

A public relations officer for U.S. Citizenship and Immigration Services downplayed the strain and stress the process might have: “Parole makes it sound bad, but basically, it’s just letting the government know: ‘Hey, I still want to be a U.S. citizen and I’m still in the process, but I need to go home to take care of my mom or I need to go home because something happened.’”

If only it were that simple for Chang. Frustrated by a delayed connecting flight in Paris, she feared she wouldn’t make it in time for her father’s final viewing in the city of Avignon. The service was from 3-5pm on Thursday, and she arrived at 4:30pm—just as her father’s loved ones gathered around his casket to say the last of their goodbyes before the burial.

Chang spent the next four weeks—from January to February—embracing what she says had been missing these last 10 years: a sense of family. She has three siblings. Two of them hardly have memories of her since she left when they were around six years old.

“I can’t say that I enjoyed my trip because I went back to France for probably the worst scenario,” she said. “I was able to see all my family members. I see my siblings even before my eyes. I see my uncle getting older—much older than they were before.”

Now Chang is back where she considers home in Austin. Her crowdfunding campaign has helped her recoup about half of her costs, raising $715 of her $1,360 goal. And more importantly, it’s enabled her to continue constructing the future she began building 10 years ago. She said her optimism is sometimes clouded by what the election may mean for immigrants like herself.

But until then she’ll just keep building.