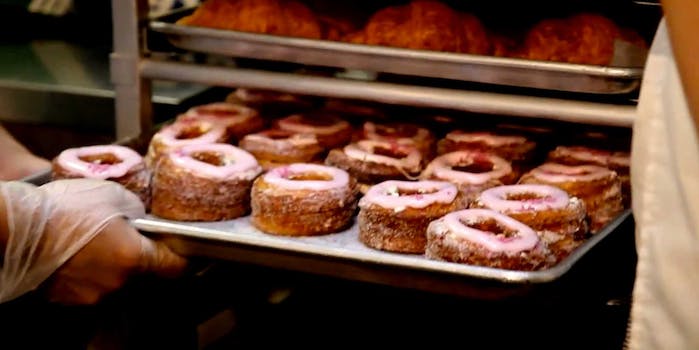 The ultimate guide to making your own cronuts

Cronuts are New York's next biggest secret—but now you can make them at home.

Cronuts are New York’s next biggest secret—but now you can make them at home.

For the uninitiated, a Cronut is essentially a doughnut made from croissant dough, and it’s only available in one bakery in Soho. French pastry chef Dominique Ansel invented the breakfast hybrid, and while they’ve only been around since May 10, people can’t get enough of them.

In fact, some get quite emotional when the bakery sells out their daily stock of 200 cronuts just minutes after opening their doors to the public.

It is not okay to flip off our baristas because we are out of cronuts. Wtf!

Ansel only sells his cronuts for $5, but due to popular demand, a cronut black market has opened up on Craigslist where you can pay someone anywhere up to $30 to wait in line and buy you a cronut or two.

But what if you don’t live in one of the five boroughs?

Until Ansel or another company start selling cronuts commercially or in bulk, you would have been out of luck—until now.

No longer do you have to wait hours on end to get your cronut fix—or pay outrageous prices to get your hands on the treat. You don’t even have to be in New York, a dilemma for many who wanted to try the treat but physically can’t get to Ansel’s bakery.

You just need the proper ingredients and access to a kitchen.

Edd Kimber won the BBC Two series The Great British Bake Off in 2010, and he’s been keeping busy since then. Not able to make it to New York to try some cronuts, he created his own recipe (if you’re in the U.S., you may have to convert the measurements).

He starts off by making croissant dough the day before since it needs time to rest. He uses a glaze with lemon and icing sugar and mixes the ingredients together to make the cronut filling. When you’re ready to fry, fill a pan two-thirds full with vegetable oil and use a cookie cutter to cut out the rolled dough and the cronut hole. Fry until golden brown, let it cool off, and add the filling and icing. 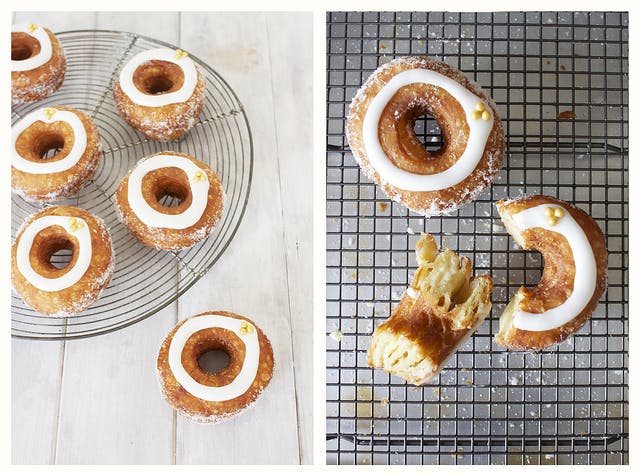 Photo via The Boy Who Bakes

Think making your own croissant dough might be too complicated? Although it won’t produce as many cronuts, you’ll save a lot of time by using a can of crescent dinner rolls instead.

After you’ve heated your vegetable oil, separate the dough into four rectangles, press the perforations, and stack two rectangles on top of each other. Grab biscuit cutters so you can get the shape of the cronut as well as the cronut hole; the remaining dough will let you make another cronut. Once the cronuts are fried, you can add vanilla pudding, top with caramel sauce and salt, and spread a mix of powdered sugar and milk on top.

If you’re worried about cooking with oil, this recipe doesn’t even require a stove. Created by Alison Heller, the cronuts are simple so you can focus more on the glaze while they bake.

Using a package of Pillsbury Grands! Flaky Layers, cut out the biscuit centers and place in the oven at 350 degrees for 15 minutes; you can also bake the cronut holes for six minutes. For the glaze, mix the sugar, milk, and vanilla extract until the sugar dissolves, then add food coloring. Glaze immediately and enjoy.