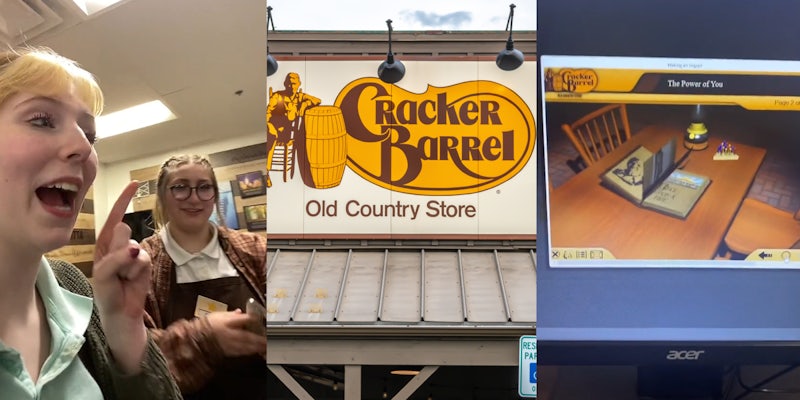 'When I trained for panera they showed us videos on the mother bread and how we should respect her.'

Two Cracker Barrel new hires have gone viral on TikTok for sharing the training modules they were given for the job.

One of the employees, named Makayla on TikTok (@makayla.noelb), shared a video of her and her co-worker doing their training. As of Tuesday, the video has garnered about 1.6 million views.

“We’re doing our Cracker Barrel training, and just look at this video of what we have to watch,” Makayla says in the video, pointing at a computer. “This is our training.”

The computer screen shows their training module, which is animated like a video game. In the module, a book opens to show a drawing of a Cracker Barrel store with the words “Once upon a time.” Dramatic music plays as the book opens.

“We all know what it looks like,” the module’s narrator starts in a raspy voice, before the TikToker stops recording.

Viewers had multiple guesses for what they thought the module seemed most like.

“Why is it using a shrek style intro,” another viewer asked.

Someone else said, “This looks like a game of RuneScape [laughing emoji].”

The module prompted other users to share the ridiculous training they’ve had to undergo for their own customer service jobs.

“At Spencer’s I had to click on Freddy fazbears fazballs,” one user shared.

“When I trained for panera they showed us videos on the mother bread and how we should respect her,” another user commented.

A third user wrote, “omg i work at texas roadhouse & we’re having to do something like this too.”

The Daily Dot reached out to the creator via TikTok comment and to Cracker Barrel via email.