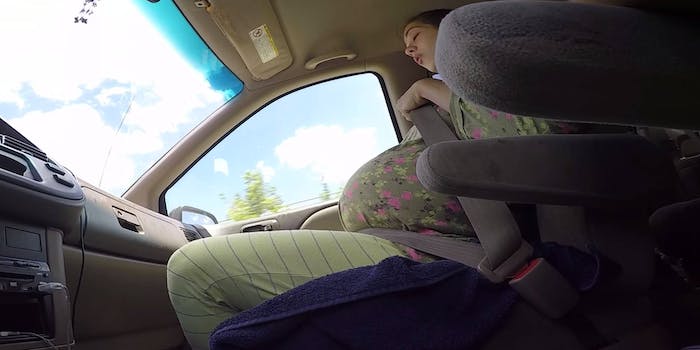 Woman gives birth in a car, and a GoPro captures it all

'So I wonder if we still have to pay for using the birth center.'

The only thing more amazing than childbirth itself is childbirth in a car. While everyone’s heard rumors of a distant family friend giving birth while in the backseat of a taxi, one couple caught the spectacular moment all on film.

On their way to the Bay Area Birth Center near Houston, one couple’s son popped out of his mother before they could get to the facility. YouTube user i8thacookies posted the video he caught with a GoPro.

The mom was obviously in a lot of pain, but she’s a champ the whole way through. She deserves that high five.

i8thacookies explains in the comments that he was just joking about wondering if they’d still have to pay the birth center—they still gave the newborn and family medical care once they got there. The couple also has two girls, so now they have a baby brother.

Congrats to the lucky parents that got this on camera. We’ll be waiting for the Lifetime original movie now.