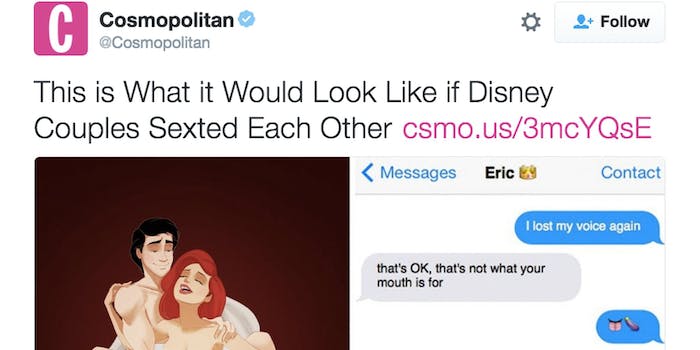 When you’re a person who looks at things online—and if you’re reading this, you’re one of those people!—there’s always the chance you’ll stumble upon a thing you wish you’d never seen. On Saturday, that thing was a Cosmopolitan blogger fantasizing about the sexting convos of your favorite animated Disney characters, as promoted in this very gross tweet:

This is What it Would Look Like if Disney Couples Sexted Each Other https://t.co/SOhWC5ekt2 pic.twitter.com/IqWRagcW8g

Actually, the post went live on Aug. 3, though it seems the magazine didn’t give it a Twitter boost till this weekend, at which point everybody who saw it asked, in one way or another, why the hell it existed in the first place. Who would have thought that two of the internet’s favorite topics—Disney nostalgia and wanton horniness—couldn’t be combined for clicks?

@Cosmopolitan I don’t know what’s worse, that you thought this would be okay or that you stole it from CollegeHumor https://t.co/nQO5SgxS8M

If Disney Couples Starred in “Fifty Shades of Grey” https://t.co/HOp2WL7I1J via @Cosmopolitan