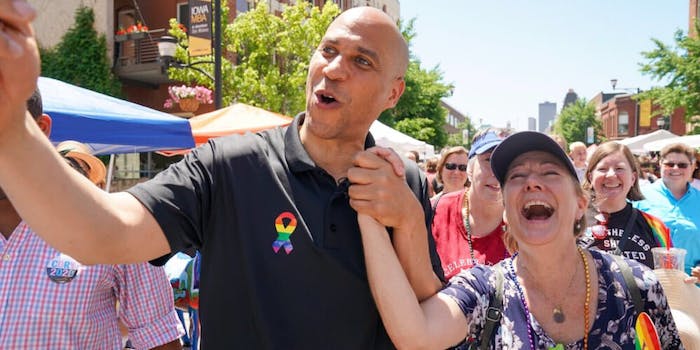 Booker shared how he would support trans people from the White House.

Presidential candidate Sen. Cory Booker (D-N.J.) spoke this week about how he would support trans people from the White House. The senator said his nonbinary relative taught him about trans issues.

Booker shared how his perspective on trans issues was influenced by his family in an interview with the executive director of the National Center for Transgender Equality Action Fund, Mara Keisling, posted to YouTube on Wednesday.

The interview started with Keisling going over Booker’s legislative record of supporting trans rights, and Booker giving credit to the New Jersey-based trans activist Babs Siperstein, who passed away earlier this year, for inspiring him with her activism. From there, the conversation turned to healthcare for trans people, and then to the epidemic of violence against trans people, particularly young trans Black women.

The pair also spoke about protections for trans children and teenagers in schools, and how Booker would repair the damage done by the Trump administration. “To deny people safe and nurturing environments means that we’re undermining their potential,” Booker said. He also referenced the statistic that about 30% of LGBTQ students have missed school due to fear. While Booker again centered how he was educated by trans activists, he said this time it was a little different because it came from family.

“My brother’s child, my ‘niephew,’ which is a combination of niece and nephew, is a trans activist,” said Booker, smiling, “who has helped their uncle be someone who is more aware of the specific issues facing trans youth in our schools today.”

On what he would specifically do to help trans students, Booker was clear that he believes trans youth should lead that conversation. “We need to have leaders that say, I don’t have all the answers when it comes to trans youth,” Booker said. “But I’m willing to elevate folks to let them sit as peers with me on figuring [it] out.”

Concluding the interview, Booker addressed the trans community directly. “I know these have been dark years. But help is on its way,” he said. “I don’t care what title I hold. You will have stronger and stronger allies in this cause.”