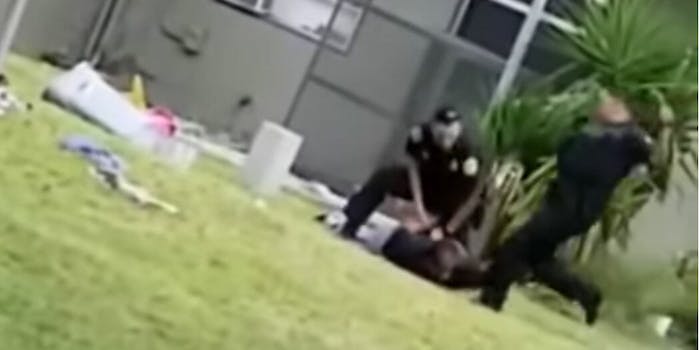 'This was a crime created on social media.'

A Miami cop has been acquitted of misdemeanor assault charges for an incident where he appears, in a viral video, to kick a suspect who’s already complying to police orders.

After the charges were dismissed on Wednesday, the officer’s lawyer called the whole thing a “Facebook misdemeanor,” the Miami Herald reported.

“This was a crime created on social media. This was a Facebook misdemeanor,” attorney Robert Buschel said. “In a court of law, the case failed.”

The charges were brought against Officer Mario Figueroa after video shared on social media in May 2018 showed David Suazo on the ground with one officer pinning him down, surrounded by three other officers. Figueroa is seen coming into frame—well after Suazo was under the control of another officer and had his hands behind him—and swinging his leg over Suazo.

Although in the video it appears that Figueroa is kicking Suazo, Figueroa’s kick didn’t actually make contact, prosecutors acknowledged, according to the Miami Herald.

“If I wanted to kick you, you know, I would have kicked you right,” he was reportedly heard saying in the body camera footage. Figueroa added that “pretending” to kick Suazo got him to comply. Suazo had reportedly stolen and crashed a car, leading to the police chase and the recorded incident.

Acquittal aside, Miami Police Chief Jorge Colina said he wouldn’t want Figueroa back on the job because he hurts the department’s attempts at “building trust in the community.” “We can’t have the community afraid of the police,” he said.

The judge dismissed the case before Figueroa even presented his defense. Suazo, who has since been in jail, wasn’t at the trial to testify.