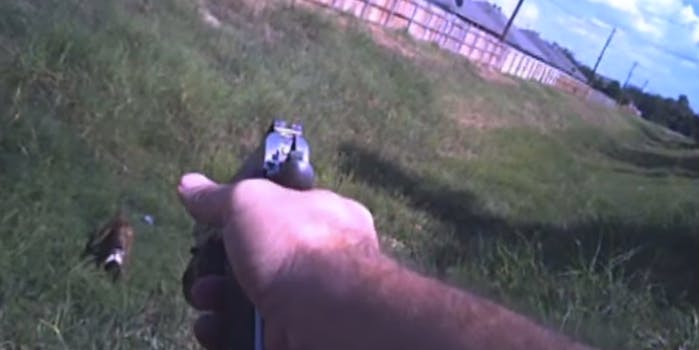 His name was Max.

Warning: This video contains graphic footage that may upset viewers.

A Texas police officer is under investigation for shooting a dog for no apparent reason.

The officer, a member of the Cleburne Police Department, is shown calling two dogs over to him before repeatedly shooting one of them with a handgun. The dog did not act aggressively toward the officer in the video—in fact, you can see him wag his tail before getting sprayed with bullets.

The officer takes aim at the second dog just as the video ends. Footage of the disturbing incident seems to have been recorded on the officer’s body camera. It was later posted to YouTube, sparking outrage across the Web.

The dog, a 7-month-old named Maximus, belonged to Amanda Henderson and her family. Henderson told local ABC affiliate WFAA that Max was a friendly dog, and insisted that the officer murdered a member of her family by killing him.

“I see a murder,” Henderson said of the video. “I see him murdering my puppy, our family … our dog.” She added: “Never once did Max stop wagging his tail. Never once do you hear a growl, an aggressive anything.”

Cleburne police say that the video, which is 22-seconds long, “does not tell the whole story.” Instead, they say, the officer was responding to a call for help from a residents who say three dogs “pinned” them in their car.

“The City is obviously concerned about the video showing an officer shooting a dog. As is often the case, the short video does not tell the whole story. The officer was responding to a 911 call for assistance. Three dogs had pinned some residents in a vehicle. One dog was secured without incident before the shooting. The officer was attempting to secure the other dogs until animal control arrived when one dog became aggressive.

“The City of Cleburne takes the safety of our residents, their pets, and our officers seriously. This incident is currently under review. The review will include interviews with witnesses and review of department policies. Once the review is concluded, any actions that may be warranted will be handled swiftly and appropriately.”

A pair of online petitions call for the city to fire the officer who shot Max, though the name of the officer mentioned in the petitions has not been confirmed by Cleburne police. According to the Cleburne Times-Review, the police report for the incident, which claims Max was acting aggressive before being shot, has censored the name of the shooting officer.

The Cleburne Police department is asking that anyone who has information about the incident call the Professional Standards Unit at (817) 556-8894.