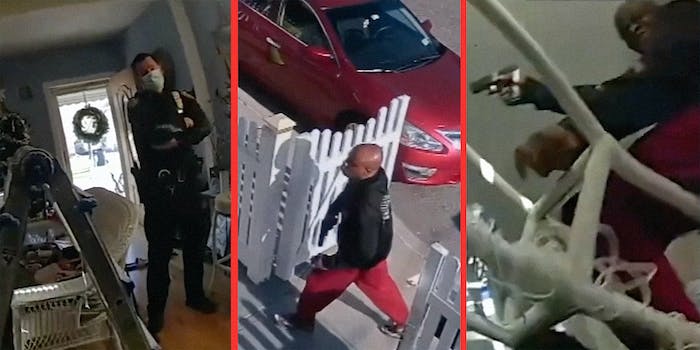 'I want to be crystal clear. Because these officers were there, that woman is alive.'

A disturbing police body camera video released by the NYPD on Friday shows the events leading up to a November 2020 shooting of a domestic abuse suspect in Queens. The footage shows police entering a home to investigate, with the suspect firing on two officers and his alleged victim.

According to an ABC 7 report, both officers on-site, Joseph Murphy and Christopher Wells, “were wounded but were able to return fire, killing the gunman, identified as 41-year-old Rondell Goppy.”

The video starts with Murphy and Wells coming into the home after telling the alleged domestic abuse victim that they would stay with her, identified as Sharon Goppy, Rondell’s wife. The news report states, “a 41-year-old woman had walked into the 105th Precinct to report the domestic violence case, and the officers then accompanied her back to the residence to collect her belongings.”

She says, “He’ll be back because he left everything here.”

They asked Goppy if she would like to pack some items to take to her sister’s house, but her concern is with her kids currently in school.

She suggests she could have the locks changed, which the officers discuss briefly.

However, Rondell Goppy, the suspect, runs into the home on 179th St. in Springfield Gardens; she alarms them of his presence. As one of the officers turns toward the door, the assailant fires into the home.

Per ABC 7, Goppy “fired 11 shots in total, striking Officer Wells in the thigh and Officer Murphy in both of his hands. The officers fired 24 shots, striking Goppy several times.” The woman was unharmed in the shooting.

“It’s clear that he was intent on getting past them so he could kill his wife,” a police source said, per New York Daily News.

“They saved that woman’s life,” Mayor Bill de Blasio in a statement following the shooting. “I want to be crystal clear. Because these officers were there, that woman is alive.”