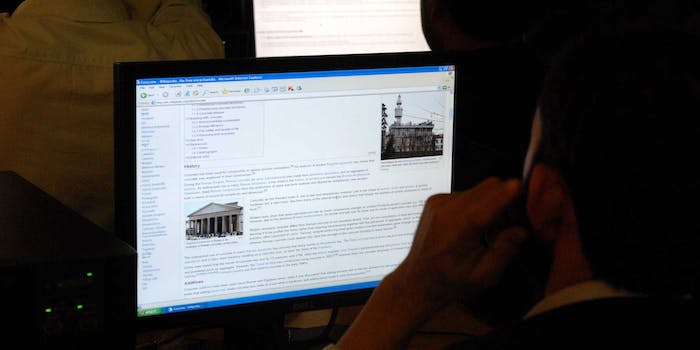 Women seem to doubt their Internet skills and are less likely to contribute.

Is there an inherent gender bias in the skills you need to use the Internet? According to new research presented by Harvard’s Berkman Center for Internet & Society, the answer is a resounding “yes.”

Two former Berkman fellows, Northwestern University Communications professors Eszter Hargittai and Aaron Shaw, presented a talk at the center earlier this month in which they examined Wikipedia’s well-known gender gap to see what broader conclusions they could draw about gender equality on the Web.

What they found is what we already know—that men are much more likely to contribute to Wikipedia than women. Interestingly, while race and socioeconomic status weren’t meaningful predictors of who would edit Wikipedia in Hargittai and Shaw’s research, gender and Internet skills level were important.

For a site known for sheer manpower—some estimates claim about 41 million hours of volunteer work gone into Wikipedia—only 9 percent of its editors are women. Hargittai and Shaw wanted to take a look at why more women aren’t participating, something that requires exploration outside the Wikipedia culture.

To do this, Hargittai and Shaw tracked students from a diverse American university for three years, from 2009 to 2012, to see if their Wikipedia usage increased overtime along with their general level of Internet knowledge. The researchers asked the students about their level of familiarity with 27 different Internet skills.

They found that of 1,000 participants they surveyed, only a fifth of all respondents ever edited or contributed to Wikipedia. Of those surveyed, men were nearly 20 percent more likely than women to report having contributed in any way. In fact, ruling out whether students were required to edit Wikipedia as part of a school assignment, only two factors were direct predictors of whether or not students would edit Wikipedia by 2012: gender and level of Internet skill.

Hargittai was emphatic that whether or not students’ assessment of their own skill levels were accurate, their self-perception had concrete effects on their willingness to use what they’ve learned and edit the website.

Considering that the Internet was built primarily by men, the research seems to reveal a feedback loop: Women perceived themselves as having low levels of Internet skills and were less likely to want to participate in building the Internet sites they use as a result.

Of course, even our ideas of what constitutes a valuable contribution to the Internet may be the product of systematic gender bias. After all, women on the Internet may not be equally building Wikipedia, but they have created, built, coded, contributed to, and run the Archive of Our Own, for example. The AO3 community is one full of women whose Internet skill sets are relatively high, but a repository of fanfiction is unlikely to be viewed as socially valuable in the same way that Wikipedia is.

But Hargittai found that the number of men reporting participation in online fanfiction creation and contribution still outpaced women. Even in arts-related areas of the Internet, she noted, men were participating more than women. Shaw said there’s more work to do on the question of what kinds of online content women are producing, and where.

Meanwhile, projects like the Ada Initiative and other tech-based advocacy groups for women are trying to rectify the gender gap. And Hargittai and Shaw pointed out that students taught to use Wikipedia in school are more likely to contribute to the site, regardless of gender, race, or socioeconomic status. The Wikimedia Foundation also tracks retention and editing behavior across the site, in order to evaluate their own outreach.

Watch the whole hour-long talk and discussion below: