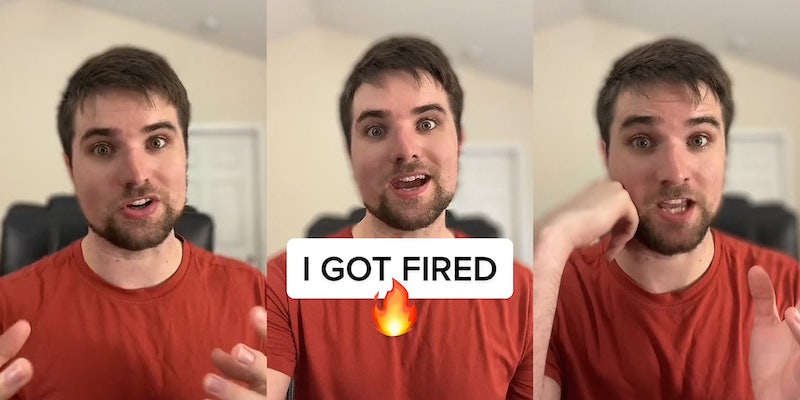 ‘Not meeting expectations either meant they ran out of work for you to do or you were too expensive to keep on’: Contractor said he was terminated by HR for unknown reason

'This probably has very little to do with you.'

Zachary Luke (@zachary.fox.luke) went viral recently for explaining how he was fired from a contract job with no notice. He has 186,000 followers and the video has received almost 100,000 views.

Luke explained that he landed the job as a technical analyst about a month ago through a local recruitment agency.

“Everything was going smoothly,” said Luke. “I’m receiving feedback from my co-workers and I’m being told I’m doing a great job and things are just going great.”

He continued, “The recruiters that helped me get the job are checking in on me, making sure everything is going smoothly, [and] I tell them it is,” said Luke. “I’m getting good feedback, and they’re just incredibly lovely, amazing people.”

Luke continued to explain the job and contract he was under.

“Even though the job was only a six-month contract, I was learning a lot [about] my role and I knew I was doing a good job and I got along with everyone, ” said Luke. “So, in my head, I’m thinking this is going great, I’m going to do really good here… until today, of course.”

Luke then explained more of the day itself and how the scenario played out with his termination.

“Today, I was super productive,” said Luke. “I was just getting my work done and I knew I was doing a great job and everyone was saying great work. One of the senior analysts was even giving me some extra data related work and I was just loving it.”

“So, I’m heading home thinking, ‘What an amazing day, I can’t wait for tomorrow’ and then my phone rings,” said Luke.

Luke then reacted how the phone call between him and the recruitment agency went.

“Hi, Zack. We have bad news,” said an agency worker, per Luke.

Luke replied, “Hi, wait, what do you mean bad news?”

The agency worker then said, “Effective immediately, the company has decided to terminate your contract.”

The agency worker then explained, “Yeah, they said that you weren’t really catching on as well as they hoped so they decided to terminate you today.”

Luke explained his shock because he had been receiving so much positive feedback and being told he was doing a great job in my role and then he was suddenly terminated.

The comments were filled with viewers willing to help him and give their advice on the situation.

“This probably has very little to do with you and a whole lot to do with the company and the temp agency,” one viewer wrote.

Another user commented, “It wasn’t performance related, it was a financial move. My guess is you aren’t the only one, others will follow.”

Luke responded to this comment, “You’re not the only one to say this. I’m starting to believe you may be right.”

He was also told that the decision to terminate him likely didn’t come from his boss or any of his co-workers but a random person in human resources. It’s routine for temp jobs, where workers are hired by a staffing agency and placed in offices, to be cut-off abruptly into a months-long commitment.

Luke ended with mentioning that if anyone could let him know of any companies hiring data analysts to let him know.

Luke also made it clear in the comments that he would not be revealing the name of the company and he will recover from that “crappy situation.”