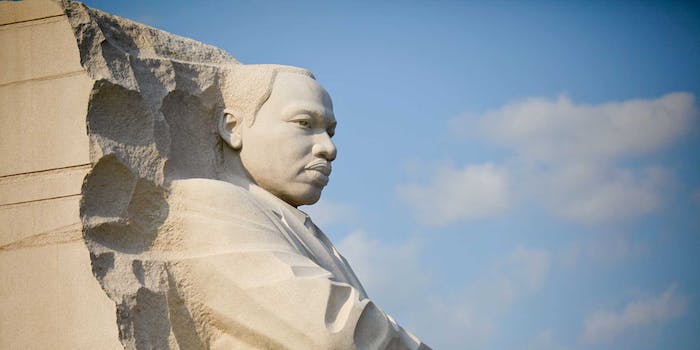 It's a simple, yet effective method.

When most people get racist messages on Twitter, they either a) ignore them or b) try to come up with a snarky, withering, devastatingly clever burn to put the bigot in his place.

While that might sound a tad reductive, that’s exactly what Georgio, an L.A.-based comedian, did. He spent Martin Luther King, Jr. Day searching for racist tweets, responding to each tweeter with a message of patience, compassion, and love:

For MLK day, I will now search for maliciously racist tweets & tell the author that I love them.

.@Kriegsson Hey, buddy. We don’t see eye to eye, but I love you.

.@marilyn_misery I assure you that I shower everyday and smell quite pleasant. Regardless of that misconception, I love you.

.@kendoll1234 I really don’t understand how this question can be funny, but I still love you and your father.

.@MayfairGhetoMoM I hope you can reassess what you just posted. However, I still love you.

Astonishingly, a handful of the tweeters deleted their original racist tweets, responding to Georgio’s message in kind:

[email protected] Thank you. Some jokes can hurt people, and it’s something you should take into consideration.

@solomongeorgio I love you to

Others reacted to Georgio’s project with befuddlement:

And a few, sadly, still hewed to their original sentiment:

@solomongeorgio leave me alone you are black

After a few hours of spreading the love, Solomon was, understandably, a bit worn out:

Thank you all for the kind regards, but sitting in my pajamas typing ‘I love you’ isn’t MLK comparable. Let’s all do more!

Of course, Georgio is right, to a degree, and saying “I love you” to racist trolls on Twitter isn’t necessarily a better defense than ignoring them or calling them out on their shit. It’s also not easy to imagine this level of civility being achieved IRL — I doubt Georgio and any of these Twitter trolls will move in and start picking out curtains together anytime soon (though if they did, I smell a sitcom).

But it’s nice to imagine a world where one could simply fight hatred with love, as elegantly and effectively as Georgio did here, and it’s certainly a lovely way to honor MLK’s memory.