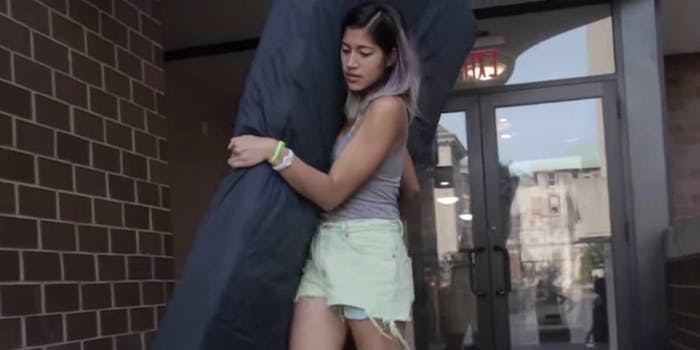 Emma Sulkowicz might have graduated from Columbia University last month, but her harrowing ordeal will live on forever—now in the form of a graphic art project.

Sulkowicz, known in the media as the “mattress girl,” who carried around her dorm room mattress to protest the university’s handling of her reported 2012 rape, filmed a video a few months back with director Ted Lawson. Her original project was called “Carry that weight,” and the new one is called Ceci N’est Pas Un Viol. As Time reports, the title translates to ‘this is not a rape,’ an allusion to surrealist Rene Magritte’s famous painting The Treachery of Images, more commonly known as Ceci N’est Pas Un Pipe, or “this is not a pipe.”

The performance, Sulkowicz writes on the webpage for the project, “is not about one night in August, 2012. It’s about your decisions, starting now. It’s only a reenactment if you disregard my words. It’s about you, not him.”

There appear to be technical difficulties with the video, but some screenshots show the look, feel, and idea of the video, which contains graphic depictions of consensual sex—and the moment it turns into rape. 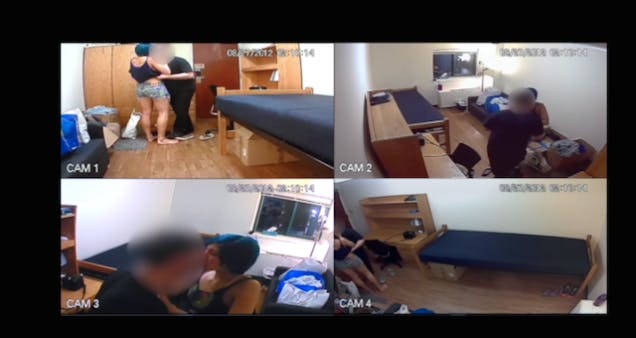 The project aims to tackle issues of consent, of exposing the truth, and most of all, vulnerability.

“You might be wondering why I’ve made myself this vulnerable,” she writes. “Look—I want to change the world, and that begins with you, seeing yourself. If you watch this video without my consent, then I hope you reflect on your reasons for objectifying me and participating in my rape, for, in that case, you were the one who couldn’t resist the urge to make Ceci N’est Pas Un Viol about what you wanted to make it about: rape.”

Despite this powerful new piece, Sulkowicz told Artnet that she does worry about being pigeon-holed. “Yeah, I mean, when people call me “Mattress Girl” I find that really infuriating. It’s like, okay great, so you think that I’ll never progress beyond that point. That I’ll be a “Mattress Girl” rather than a living, breathing person who has the ability to change.”