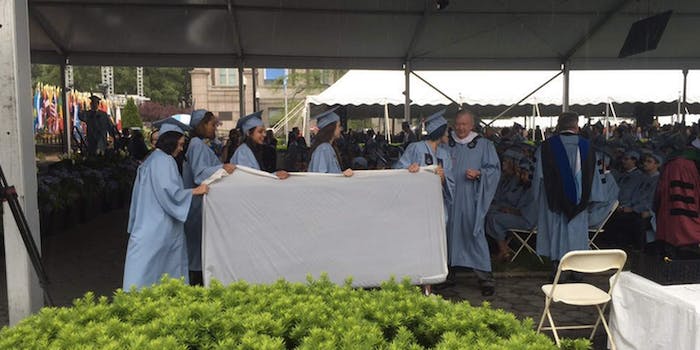 Emma Sulkowicz had friends and her mattress in tow when she graduated last Tuesday.

Columbia University student Emma Sulkowicz has carried around a mattress with her for an entire school year. So when she crossed the stage to graduate on Tuesday, it was no surprise that the mattress came, too.

The mattress was part of Sulkowicz’s senior art project, entitled “Carry that Weight.” It’s a visual representation of how the university handled her alleged rape. Sulkowicz alleges that she was raped by fellow student Paul Nungesser and that the university knew about it and did not expel him.

“I was raped in my own dorm bed and since then, that space has become fraught for me. I feel like I’ve carried the weight of what happened there since then,” Sulkowicz told the Columbia Spectator in September.

There was speculation before Tuesday’s ceremony that the mattress would not be allowed to accompany Sulkowicz to graduation. The university sent out an email to graduates on Monday, stating the following:

Graduates should not bring into the ceremonial area large objects which could interfere with the proceedings or create discomfort to others in close, crowded spaces shared by thousands of people.

The Spectator points out that such language was not included in emails to previous graduating classes, creating speculation that perhaps the warning was targeted at Sulkowicz and her mattress.

But she showed up on Tuesday with her mattress in tow, and no one stopped her. Teo Armus, a deputy editor and photographer at The Spectator, captured photos of the dramatic scene.

Armus also noted that Sulkowicz did not shake university president Lee Bollinger’s hand as she crossed the stage.
Nungesser, who publicly revealed his name and denied the allegations in a Daily Beast interview, also graduated on Tuesday. Armus tweeted photos of him as well.

This could mark the end of Sulkowicz’s project. But the emotional and legal fallout of the case will likely continue long after graduation.