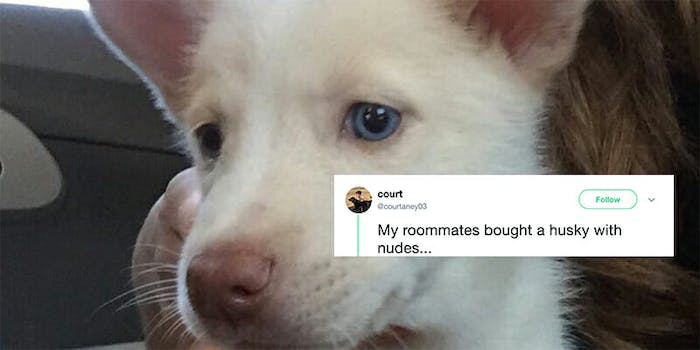 'That's just how the internet works.'

Some college roommates from Texas sent Twitter into a frenzy this week when a tweet explained how they exchanged a friend’s nude photos for a husky puppy.

The four freshmen girls live together in San Antonio, Texas, and had been wanting a dog for a while, BuzzFeed News reported Wednesday. One of the roommates, Alyson, saw a friend selling nine husky puppies online and asked him how much it would be to buy one.

Instead of giving a dollar amount, the friend responded, “Send nudes.”

He followed up to deny sending the text, insisting it was a friend who sent the nudes request, but Alyson had already consulted with her roommates.

They all agreed on sending a friend’s nudes (with her consent) in exchange for the pup.

And, dear reader, the roommates did get the puppy. His name is Balto.

The entire saga was tweeted by one of the roommates, Courtaney.

Twitter had mixed responses. Some people thought the deal was horrible (and also, did the girls know they could puppies for free?).

And y’all wonder why decent guys ain’t into you

she could've gotten one without nudes https://t.co/qb26WbpqLm

Others thought it was a brilliant move and cheered the girls on.

Yeah honestly i see absolutely nothing wrong w the transaction lmao people are trippin. Long as you guys take care of the puppy you’re golden.

Courtaney defended the transaction on Twitter, emphasizing they had full consent to send the friend’s nude photos—and that the pup will be taken care of.

we all dog lovers here

According to BuzzFeed News, Courtaney didn’t expect her tweet to go viral, and at first, one of the roommates feared repercussions from their school. But now that it’s all said and done, they have an attitude of “haters gonna hate.”

“That’s just how the internet works,” she said.