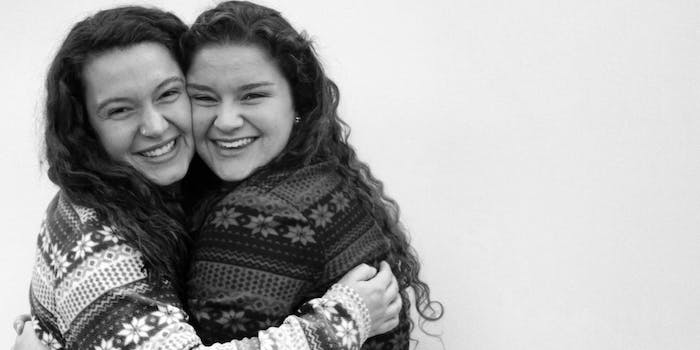 Sometimes you go to college to find yourself. These young women found each other.

When most college freshmen enter the roommate selection process, they try to find a roommate based on shared habits and interests, such as a mutual love for reggaeton or an aversion to going to bed after 11:30 on a weeknight. Not so for Tulane freshmen Emily Nappi and Mikayla Stern-Ellis. They entered college looking for a roommate, only to find a half-sister.

In a story that seems lifted from the pages of your favorite 1980s young adult novel, Nappi and Stern-Ellis first met as high school seniors from San Francisco and San Diego, respectively. They had just been admitted to Tulane, and Stern-Ellis contacted Nappi during the roommate search process.

Although the two didn’t end up rooming together, they discovered they had a lot in common, such as a shared interest in the performing arts. They continued messaging on Facebook before the semester started, and became fast friends once they got to Tulane.

Eventually, Nappi and Stern-Ellis discovered not only did they both have sperm donor fathers, but their fathers shared the same ethnicity (he was Colombian). Yet they didn’t make much of the coincidence, until Mikayla went home over winter break and told her parents Debra and Heidi about her new friend.

After learning that Mikayla and Emily shared a Colombian sperm donor and comparing photos of the two (as you can tell from the above photo, they look strikingly similar), Debra and Heidi urged Mikayla to text Emily and ask for her donor number. It was the same as Mikayla’s.

“We thought [going to Tulane] she’d just find an education, but she found a sister,” Debra Stern-Ellis told the Tulane Hullabaloo.

Emily and Mikayla also embraced the news, updating both of their Facebook profile defaults to a photo of the two of them hugging.

“An invisible thread connects those who are destined to meet, regardless of time, place, and circumstance,’” Stern-Ellis wrote on her Facebook page, paraphrasing a Chinese proverb. “‘The thread may stretch or tangle. But it will never break. BEST. BIRTHDAY. PRESENT. EVER.”