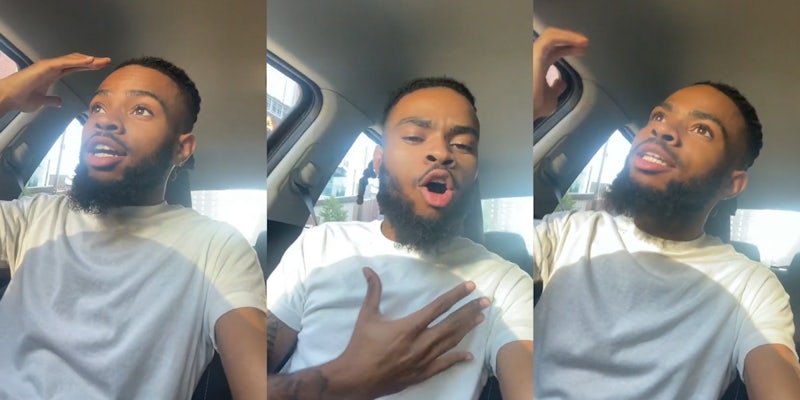 ‘I dont know you like that… the audacity!’: Man asks co-worker for a ride home—before he knew his name

'I ain't even been there two weeks yet. I don't even know bro name.'

After meeting someone at a work orientation, a man sparked debate on TikTok after sharing that his new co-worker asked him for a ride home. Kansas City, Missouri-based TikToker Dominic Porter (@deezkc) believes his friendliness led his new co-worker to attempt to take advantage of him.

In a viral clip, he states that while training for a new job he became friendly with another new hire, and the two shared some jokes. They were only a few days on the new job together before the individual started asking for him to front him some money to buy items from the concession area at work.

Porter obliged the individual multiple times, but it was when the person asked him for a ride home—before he even knew the man’s name—that he decided to draw the line.

“Hey man, Black people, we gotta stop getting too comfortable with people too fast,” Porter begins.

He explains that he met the man at his work orientation, and they soon became friendly.

“So when we start working, you know what I’m saying bro gravitates towards me, I’m a people person you feel me…they gonna gravitate towards me. It don’t matter. I just like talking to people.”

When his co-worker asked him for money to purchase lunch from the vending machines, Porter says he’d help him out that one time. It seemed that his co-worker’s first ask, however, turned out to be a setup for future favors. Porter says the individual was taking advantage of his kindness and people-pleasing demeanor. He claims that he asked him for money two more times.

“This the killer right here,” he says. “So just today, you feel me, I ain’t even been there two weeks yet. I don’t even know bro name. I call him cuz, I call you cuz,” he seems visibly flabbergasted at this point. “So when I’m walking out, cuz asks me to take him home. I don’t know you like that. You don’t know me like that. Why do you want me to? The audacity! I wanna go home just like you wanna go home. But the difference is, I got a whip. I’m not down-talking you, but you can’t just expect me not to want to get straight to the crib. And my answer wouldn’t have changed but even if you would have offered some gas, I would have thought about it but it wouldn’t have changed shit.”

He finished his clip by stating, “That’s why I’m saying we gotta stop getting too comfortable with people so fast, you already, you asking me for money we both working the same job and you asking me to take you home…”

Viewers generally agreed with Dominic, citing their own experiences dealing with folks who are quick to ask for favors.

There was one user in the comments section, however, that some speculated was the individual Dominic was talking about in his viral clip. “You act you never needed nobody, people like you get a lil job and a out of date car and forget where you come from…you spoke on it and it showed who you really are,” they said.

Others responded to this TikToker (@GG225).

“You must be the one that needed the ride lmao and I find it SO FUNNY people refer to shit as “lil” when they don’t have it,” one user wrote.

“This person must know you. Bc you got him flabbergasted. how you upset or having any opinions on someone else’s money. The audacity,” another argued.

@GG225 was of the opinion that if you are willing to help someone out multiple times then you should be on the hook to continually provide for them, even if you are working the same exact job as they are. “You are correct but could have easily said no if he was going to complain about it later, don’t start something you can’t keep up,” the user elaborated.

Dominic responded to this particular individual’s comment in a follow-up TikTok stating that they were “faking for the internet” with their response.

Other TikTokers argued that the man couldn’t take responsibility for their own actions or provide for themself.

“Cuz is just a User, you gotta tell ppl like the NO from jump!” one viewer wrote.

“I tell people no quick asf if they need a ride home,” another added.

“You not have to explain anything. It’s your money. You helped out of the kindness of heart. However, he’s grown and need to stand on his own,” a third explained.

Others thought that the person was a straight-up con man, working his angles from early on.

“That’s some psychology method tho ask for small things and start upping it to see how far the person will let you go,” a TikToker claimed.

The Daily Dot has reached out to Dominic via TikTok comment for further information.