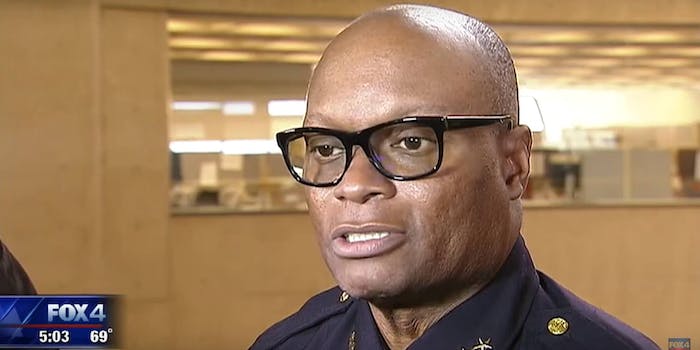 Dallas police chief David Brown appeared on CNN's 'State of the Union' on Sunday to discuss the week's harrowing events.

On Sunday morning, Dallas police chief David Brown appeared on CNN’s State of the Union with Jake Tapper to discuss what’s surely one of the darkest weeks of his policing career. In the midst of what was reportedly an otherwise peaceful and harmonious anti-police violence protest, five officers of the Dallas Police Department were slain by an ambushing sniper, and seven more injured on Thursday.

The incident instantly gripped the national consciousness. Between sympathy for the police, sympathy for the protesters (and the pair of black men whose fatal shootings by police officers spurred them, Alton Sterling and Philando Castile), and the struggle to hold and respect all sides and issues at once, it’s been an undeniably tough and tiring week.

Brown’s interview with Tapper spoke to that fatigue, too. While it was a wide-ranging conversation, there was an obvious weariness in his voice, having just lived what was probably one of the hardest weeks of his life.

Tapper and Brown discussed a wide range of issues surrounding the Dallas shooting and the protests that preceded it, including the use of a robot to detonate a bomb which killed the suspected gunman, the recent surge of anti-police brutality protests, the state of gun control in America (although Brown ducked this question), and the way media and the American public thinks of police officers.

On the first point, the robot that ultimately killed the gunman and halted the chaos, Tapper questioned Brown about some of the criticism that’s emerged since. While few voices have argued against the tactical decision to use the robot (which is typically tasked with diffusing bombs) to end the standoff, it has raised questions about ethics and proper protocol. Brown, however, was having none of it. To the contrary, he stood firmly and unapologetically behind his decision.

“I began to feel that it was only at a split-second he would charge us, and take out many more before we would kill him. So I was planning a press conference, before I walked out the door I said ‘I want a plan, when I get back from this press conference, to end this,’ and I said ‘use your creativeness to come up with a plan to do it.’ When I got back from the press conference they presented to me what was probably a 15-minute plan they put together, to improvise our robot with a device to detonate behind the corner within a few feet of where he was to take him out. And I approved it, and I’ll do it again if presented with the same circumstances.”

Brown also discussed what the authorities have learned so far about the gunman, identified on Thursday as Micah Xavier Johnson, adding a very grisly piece of context to the story that law enforcement has already put out.

In the aftermath of the shooting, it was widely reported that Johnson was motivated by animus towards police, wanting to kill officers (and, according to Brown, specifically white officers) due to recent killings of black people by police throughout the country. For the record, Brown has also said that Johnson denied any affiliation with any group or organization. But he did apparently leave a message behind, or at least attempted to, written in his own blood.

“I think that this killer obviously had some delusion, there was quite a bit of rambling in [his] journal, that’s hard to decipher. I could just add, at the scene where he was killed, he wrote some lettering in blood on the walls, which led us to believe he was wounded on the way up the stairwell in the second floor of the L Central building. And where we detonated the device to end the standoff, there was more lettering written in his own blood. … he wrote the letters ‘RB.’ So we’re trying to figure out, by looking at things in his home, what those initials mean.”

Perhaps the most forceful portion of Brown’s remarks, however, came when Tapper asked him what could be done to help the families of the Dallas victims. Brown urged anybody who wants to donate to visit Dallasfoundation.org and ATOdallas.org/donate, both of which directly benefit the families of victims and who he thought needed to show more support to members of law enforcement. This elicited a soft-spoken yet stern reply from Brown, who seemingly criticized both the media and protesters for “jumping quickly to conclusions” when videos of officers killing civilians are released.

He also pleaded for “the silent majority” to speak out in favor of police, a phrase first made famous by President Richard Nixon as a call-to-action against the anti-Vietnam counter-cultural movement of the 1960s and 1970s.

“Media, public officials, and our communities. How media tells the story, how you sensationalize the video, how you edit the video. Show the whole story and when you don’t know the whole story say there’s more to be determined instead of jumping quickly to conclusions without a full investigation. We need more people in the community to come forward, there’s a silent majority out there that doesn’t realize that a minority voice is loud, critical of law enforcement without all the facts. And our public officials, local and national, need to step up ― I’m encouraged by what I’ve heard, but we all need to make sure that there’s no question in the mind of our officers that they’re supported when they do the right things.”

Brown did add that those who don’t do the “right things” should be separated from employment to help prevent good police officers from being “painted with a broad brush.”

Tapper also asked Brown about his own painful history with police violence, having had officers in his department slain before, and even enduring his own son fatally shooting an officer in 2010 before being killed in the incident. Brown declined to delve into his personal history, preferring to stay focused on the issues at hand, and he did the same when Tapper asked him his views on gun control, saying “let’s let the policy-makers solve that problem.”