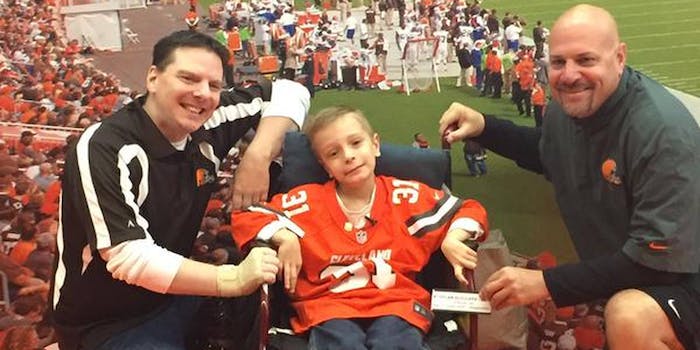 The incredible day was orchestrated by the Make-A-Wish Foundation.

The young Ohio boy suffers from ataxia telangiectasia, a rare, recessive genetic disorder that affects many organs in the body. Most people afflicted with the illness have trouble walking and require the use of a wheelchair.

Sutcliffe’s dream has always been to play for the Browns. Thanks to the Make-A-Wish Foundation of Ohio, Kentucky and Indiana, that dream has come true, if only for one day.

On Tuesday morning, a limo brought Sutcliffe to the Browns’ training facility in Berea, Ohio. He was accompanied by his parents, grandparents, and his four-year old brother, Sean, who has also been diagnosed with the same disease.

Browns General Manager Ray Farmer announced the signing at a press conference. “We’re excited to add another quality player to our roster as we prepare for the 2015 season,” he said. “When we first connected with Dylan, it was clear he was a competitor who had all of the right attributes to be a contributor to our team.”

Dylan Sutcliffe will be outfitted with his own locker in the @Browns locker room before taking the field at noon. #GoBrowns

The signing is part of the Browns’ First and Ten volunteering initiative, an Ohio-based community service program. Dylan will be having a private coaching session with Head Coach Mike Pettine. He’ll also be holding a press conference with media before taking the field with his new teammates.

This isn’t the first time Make-A-Wish has helped a young person fulfill his dream of being a pro sports player. In March of 2014, the San Jose Sharks invited 18-year-old Sam Tageson, who was diagnosed with a life-threatening heart condition, to join them during team practice. The team also invited Tageson to skate onto the ice with them at the start of a game.