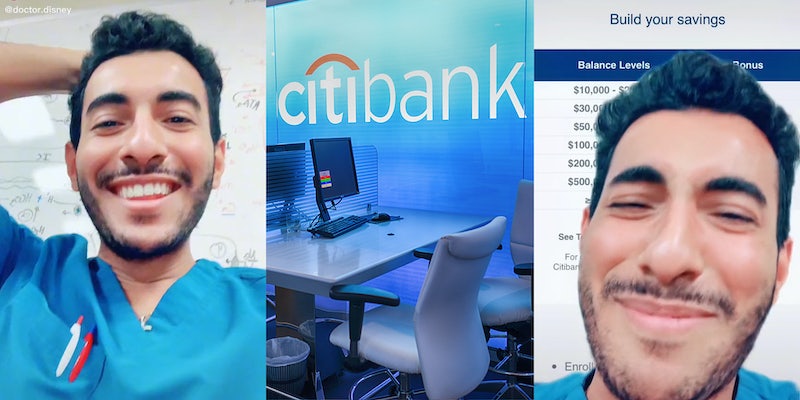 A TikToker shows a promotional email from Citibank that advertises a $40 bonus for depositing at least $10,000 to a new savings account, joking that you can only afford to “buy pizza” with the bonus amount.

In the video posted by TikToker Peter (@doctor.disney) on Sept. 17, he shows a screenshot of an email advertisement from Citibank, prompting customers to “Build your savings.”

“The subject is ‘Claim your bonus reward right now,’ and it’s talking about how you should start a savings account with Citibank. And I have laughed at this email several times,” Peter says in the video.

He shows the different “tiers of how much money you can put into a savings account,” starting at the lowest tier that requires a deposit of at least $10,000.

The video has reached over 296,000 views as of Sept. 19, with commenters putting Citibank on blast for its low bonus offer.

“No way they thought those emails were a good idea,” one user wrote.

“Whoa, whoa, whoa…. they’re underselling it. no way that $40 doesn’t include like a calendar or a Citi Bank mouse pad,” a third joked.

However, several other commenters pointed out that Citibank’s rates are “comparable” to other major U.S. banks.

“What is a comparable bonus? Seems consistent to other banks,” one user asked.

“I mean, that sounds about right based on current interest rates lol. That’s like 1.5% APR but up front,” another wrote.

The Daily Dot reached out to both Citibank and Peter via email.