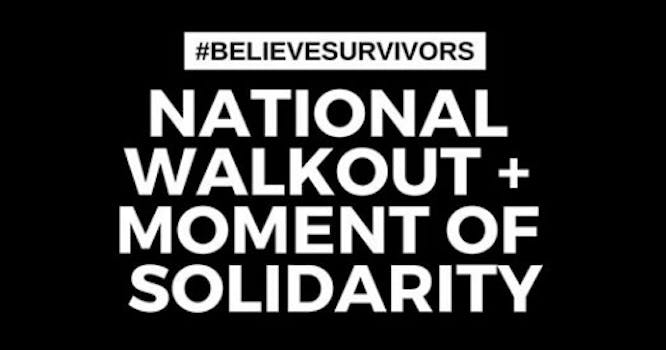 Supporters are encouraged to walk out at 1pm ET on Monday.

In the week since Christine Blasey Ford came forward as the woman who accused Supreme Court nominee Brett Kavanaugh of sexual assault, she has been doubted by Senate Republicans, attacked by President Donald Trump, and forced to leave her home and go into hiding.

In a show of solidarity, a growing list of people—including Tarana Burke, the founder of the #MeToo movement, and groups like the Women’s March, Alliance for Justice, and NARAL Pro-Choice America—have come together to organize a national walkout in support of Ford.

The walkout and moment of solidarity is scheduled to take place Monday, Sept. 24, at 1pm ET.

The event is intended to be easily replicable so people can organize their own walk-outs, no matter where they are throughout the country or even the world.

“This is nationwide. In D.C. we will gather on the steps of the Supreme Court. Feel free to organize your own,” Ilyse Hogue, the president of NARAL Pro-Choice America, commented on a post asking for a central gathering place.

The Facebook event explains to participants that, “All you need to do is wear black and walk out—of your home, your office, your classroom, wherever you are—and post a picture to your social media with the hashtag #BelieveSurvivors.”

The event also encourages supporters who don’t have the option to “walk out” of their jobs, offering alternative ways to be a part of the movement.

“If you can’t walk out, you can show your support by posting a video or a picture to this event. Help spread the word: we believe Dr. Blasey Ford. We believe survivors. And we won’t stand for Senate Republicans’ despicable attempts to strong-arm a sexual assault survivor,” reads event’s description on Facebook.

Other hosting organizations include the YWCA of the U.S., Alianza Nacional de Campesinas, Progressive Turnout Project, End Rape on Campus, and the National Women’s Law Center.