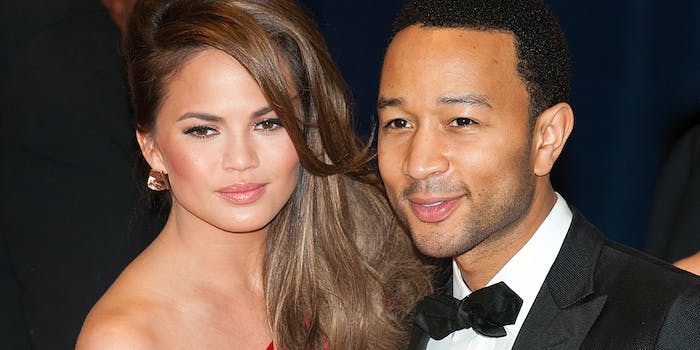 A pregnant Chrissy Teigen and John Legend, along with 224 other passengers, spent four hours on a plane to Tokyo before it turned around unexpectedly and went back to LAX.

Tuesday evening, Teigen tweeted that this was a first for her, calling it an 8-hour “flight to nowhere.”

a flying first for me: 4 hours into an 11 hour flight and we are turning around because we have a passenger who isn’t supposed to be on this plane. Why…why do we all gotta go back, I do not know

Lmao after all this I will have spent 8 hours on a flight to nowhere. Like we were all just havin a great time up here flyin in the sky watching gran torino time to go home now

In her characteristically charming way, Teigen livetweeted updates about the incident as it unfolded, building suspense over whether she would ever get out of airport sequestation. She said a passenger had gotten on the wrong flight, and after the plane landed in a secure area, those who were seated near the misplaced passenger were interviewed by police.

They keep saying the person had a United ticket. We are on ANA. So basically the boarding pass scanner is just a beedoop machine that makes beedoop noises that register to nowhere

There is a 20 minute interview before we can get off the plane!! This is my dream. Police! Talk to me talk to me

I have been moved to a room with Bravo. Clearly the authorities are trying to keep me quiet so I don’t BLOW THE LID OFF THIS “SITCH” pic.twitter.com/ohhpCmjviG

We live here now. This is our new life pic.twitter.com/ero7e5kFOm

During the hullabaloo, another passenger, who marked the occasion with his first tweet, was able to snap a selfie with Teigen and Legend.

My first tweet can’t be more epic than this: just survived an 8-hour LAX-LAX flight with @chrissyteigen and @johnlegend on #ANA #NH175 pic.twitter.com/yY0vIqfcja

In a statement, All Nippon Airways said the plane left LAX at 11:36 a.m. and returned at 7:33 p.m. “During the flight, the cabin crew became aware that one of the passengers boarded the incorrect flight and notified the pilot,” the statement said. “As part of the airline’s security procedure, the pilot in command decided to return to the originating airport, where the passenger was disembarked.”

ANA said it is currently investigating the situation to determine how the passenger was able to board the flight.

By early Wednesday morning Teigen and Legend were able to get on another flight and were again Tokyo-bound.

Getting on another flight now oh bless