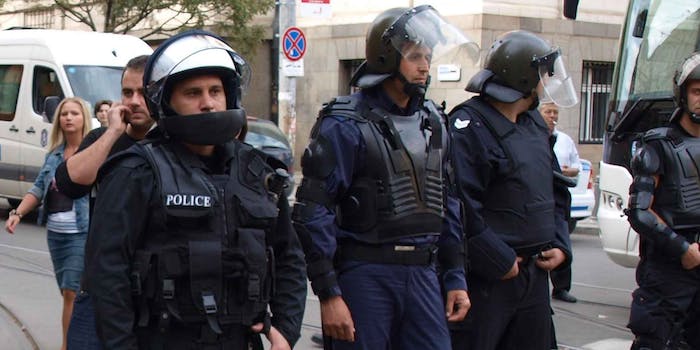 Just another another day in American law enforcement’s war on black people.

A video posted to YouTube last week shows a black man in St. Paul, Minn., being arrested and Tased by white police officers for apparently no other reason than he happened sitting down in the wrong part of town.

Chalk it up to another case of sitting while black.

The video was shot back in late January by Christopher Lollie, who was in downtown St. Paul waiting to pick up his children from New Horizon Academy.

The nearly six-minute clip begins with a police officer demanding to know Lollie’s identity and why he was sitting in the area. Lollie, insisting that he was in a public place and had done nothing wrong, refused to comply. “Why I have to let you know who I am?” he asked.

?Because that’s what police do then they get calls,” the officer responded.

After going back and forth, Lollie eventually gets to the heart of the matter.

?The problem is I’m black, that’s the problem,” he charged. ?Because I didn’t do anything wrong. I wasn’t sitting there with a group of people. I was sitting there by myself… not causing a problem with anyone. There isn’t a sign that says, ?This is a private area, you can’t sit here.’”

?I’m not here to argue and I’m not your brother,” the cop responded.

Throughout the entire exchange, Lollie is instant and forceful, but never comes close to threatening violence. In a statement regarding the video, the St. Paul Police Department said officers were called to scene following a call from a private security guard, who told them Lollie was trespassing in a private area in the First National Bank Building:

With no information on who the man was, what he might be doing or why he refused to leave the area, responding Saint Paul police officers tried to talk to him, asking him who he was. He refused to tell them or cooperate. Our officers are called upon and required to respond to calls for assistance and to investigate the calls.

In an interview with Minneapolis City Pages, Lollie called the official account of events a complete fabrication. “It’s all false,” he said. “They lied.”

In a comment posted to the video early Saturday morning, Lollie noted that all charges against him were dismissed in late July. ?Which means everything I did I had a legal right to do,” he insisted. ?You can say as much as you want against my case… But the fact that it was already dismissed shows your opinionated predisposition when you comment saying ignorant things… I was vindicated of all charges already.”

In his City Pages interview, Lollie added that the charges were dropped after a teacher at his daughter’s school witnessed his arrest and verified his version of events over what was claimed by the arresting officers.

St. Paul Mayor Chris Coleman said on Friday that he is ordering an internal police department review of police conduct during Lollie’s arrest. “While the incident occurred over eight months ago, the video raises a great deal of concern, especially given this summer’s shooting death of Mike Brown in Ferguson, Mo.,” Coleman said in a statement.

However, not everyone thinks the review will be productive. “In my experience, internal affairs is not there to actually address problems,” Lollie’s lawyer Andre Irlbeck told the St. Paul Pioneer Press. “It’s there to provide a facade of transparency.”

Irlbeck added that Lollie plans to file a federal civil rights lawsuit over his treatment.

After the video was posted online, the incident attracted national media attention. Yet, had Lollie not thought to record his arrest as it was happening, it’s extremely unlikely anyone outside of his immediate social circle would have known about it.

This exposure is precisely why, in the wake of both Ferguson and a seemingly endless wave of reports of white police officers harassing, assaulting, and even killing African-Americans based on justifications viewed by many as outrageously thin, there have been calls for additional protections for citizens to record police on the job. Doing so is unquestionably legal; however, there have been myriad examples of police officers around the country arresting, detaining, and assaulting people for filming them while in action.

As such, there’s been additional demands for more police officers to be required to wear body-mounted cameras that record everything they do. More than 150,000 people signed an online White House petition asking the Obama administration to push for a national law mandating all cops wear tamper-proof cameras. That way, it doesn’t matter if police block the public from filming their actions. Everything they do will still be caught on tape.

There is some evidence that cop-mounted cameras vastly improve the way police interact with populations they’re tasked with serving. After the southern California city of Rialto put cameras on its police officers, complaints against the department decreased by 88 percent and the number of times officers used force against civilians fell by 60 percent.