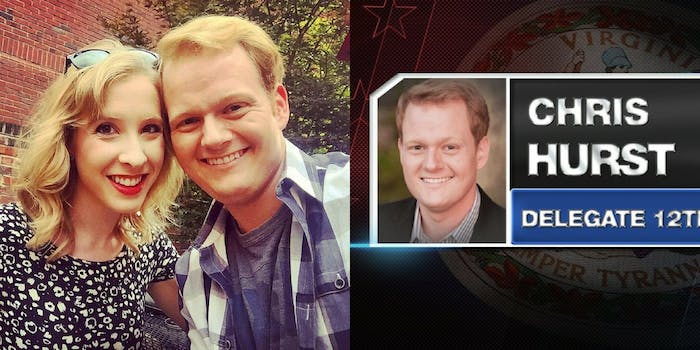 He ran in his former girlfriend's honor, but concerned about more than gun control.

In 2015, Roanoke, Virginia, station WDBJ morning anchor Chris Hurst was mourning the loss of his girlfriend and fellow reporter Alison Parker, who was gunned down during a live interview. Two years and two months later, Hurst is celebrating his election win in the 12th District of the Virginia House of Delegates in her honor.

In an MSNBC profile, Hurst said he quit journalism and chose to run for political office in memory of Parker, and hoped to reduce gun violence and prevent similar gun-related tragedies.

“I am partly doing this to show what I think one person can do in response to tragedy, but I’m really motivated to try and run for office to help and serve the people of Southwest Virginia who gave me so much strength and love and support in my time of need,” Hurst said.

Hurst defeated three-term Republican incumbent Joseph Yoast, who was heavily-backed by the NRA and had experienced the death of a friend in 2007’s Virginia Tech shooting.

According to ABC affiliate WJLA, while Hurst was backed by gun-control groups, his campaign focused on education, healthcare, and the environment. In his MSNBC interview, Hurst said he was most disappointed at the insistence that he was only running on the platform of reducing gun violence.

“Alison and I were interested in so many subjects that impacted Virginia families during our time in journalism, that to say that I would be reduced to only one issue that I would care about is incorrect,” Hurst said. “Certainly, we have a lot of work to do in Virginia to try to prevent homicide and suicide by gun, but here in the 12th District the families I’m talking with are interested in making sure Virginia properly funds its education system, that we expand Medicaid and have more health care access for Virginians, and that we do to try to create new economic development and industry in an area that has not seen a lot of growth over the past few decades.”

Going to see Shakespeare in Staunton on a Midsummer Night!

On Aug. 26, 2015, while conducting a live TV interview, Parker, photographer Adam Ward, and Vicki Gardner, a local chamber of commerce executive director, were gunned down. Gardner survived the attack, while Parker and Ward died at the scene. The gunman was identified as Vester Lee Flanagan II, a former WDBJ reporter who had been fired for disruptive conduct in 2013.

Hurst and Parker had been dating for nine months and had just moved in together at the time of her death.

“She was the most radiant woman I ever met. And for some reason she loved me back,” Hurst had tweeted at the time. “She loved her family, her parents and her brother.”

Hurst became a public figure representing his news station and their grief, and garnered national and social media attention as a result. After quitting his job, Hurst moved to Blacksburg, Virginia, to run his campaign.

“I think [Alison] would be incredibly proud,” Hurst said, when asked about what he thought his former girlfriend would think about his campaign. “I feel her with me all the time.”