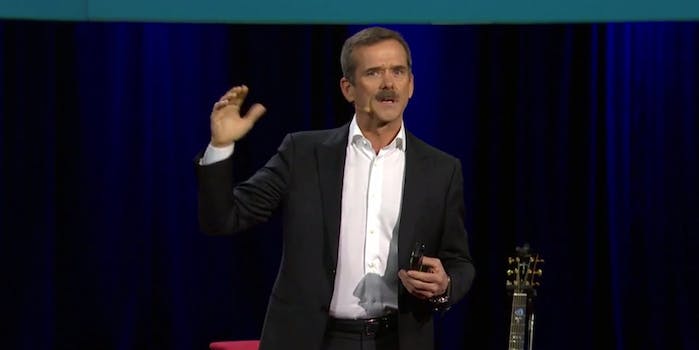 What's the scariest thing that's ever happened to you?

Former astronaut Chris Hadfield is full of great advice, and it was no different for his TED Talk.

He spoke in front of an audience about what his time on the International Space Station taught him about fear. He already had a risky profession where, on his first shuttle flight, the odds of catastrophic failure were 1 in 38, but he pushed on anyway because he was “inspired as a youngster” and it’s what he wanted to do in life.

But his fears came to a head when it surfaced at what looked like the worst possible moment: He went temporarily blind during a space walk after his eyes teared up and had to talk himself through it.


“Even if you’re blinded, your natural panicky reaction doesn’t happen,” he said. “‘I can hear, I can talk’… It’s not nearly as big a deal. And actually, if you keep on crying for a while, whatever that guck was in that’s in your eyes starts to dilute and you can start to see again.”

The entire Talk is worth a listen, and he even ends it with a performance of “Space Oddity,” which never gets old.