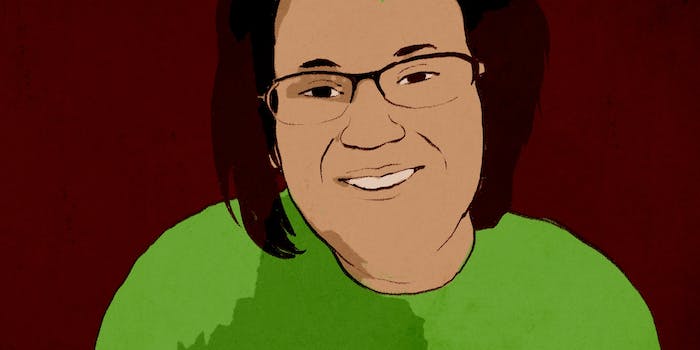 Candace Payne wants to remind us to heal the world and make her go viral again.

Candace Payne, who is better known as “Chewbacca mom” for her viral video fame, is back again with another video. This time the video features Payne, a resident of Grand Prairie, Texas singing Michael Jackson’s “Heal the World.”

In the video, Payne says that she hopes to spread joy, but that she’s been silent lately because she’s been “so sad.” And despite feeling vulnerable, she felt that “someone needed to sing these lyrics again and sing them over our world and just be a good reminder.”

The video has over three million views and the comments thank her for reminding them about Michael Jackson’s very popular hit, which spent weeks on the charts after its release.

The video itself is problematic—a white woman covering a black man’s song, in order to “raise awareness” for the incidents of last week, which saw two black men murdered at the hands of the police, and 12 police shot by a sniper. As such, the response to her video has been a lot more tepid on Twitter.

Chewbacca mom is not the moral compass of this country. She's a woman who bought a mask and did stuff in it.

You don't have to do this, Chewbacca Mom. I don't know what it is yet, but whatever you are planning next we'll be fine without it.

Perhaps we would all be better off if we just listened to the man himself.