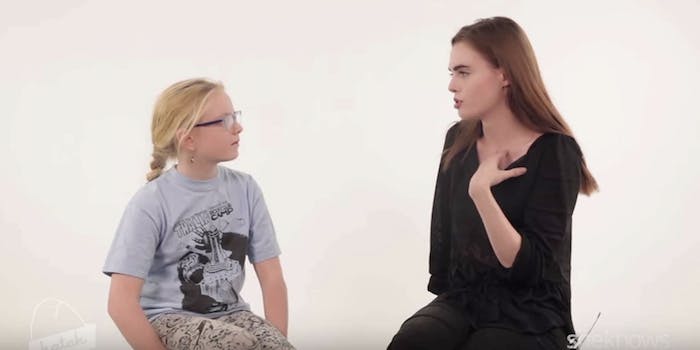 Model who quit agency in protest fights back with #MoreThanANumber

When model Charli Howard’s agency told her she was “too big” and “out of shape” to work in the fashion industry, she issued them a giant “FUCK YOU” via Facebook and quit. After her widely celebrated, bold move earlier this month, she’s helping people increase their body confidence with a new social media campaign.

Howard is working in partnership with SheKnows Media to create a more body-positive world for models and non-models alike with the #MoreThanANumber campaign. In a video released Monday, Howard sat down with a young girl from the #HatchKid series, which educates young people about the intersections of digital media and social awareness.

“How do you think we can teach girls to have this strength and confidence before the problem is too big?” the girl asks Howard.

She replies: “I think that a lot of the time society says women and young girls can’t speak out, and that we’re there just to be looked at. But I think that if you’re aware you’ve got a voice, just use it. Just believe it yourself, as well.”

This video, however, is just the beginning. Howard is calling on others to share their “number,” one which is significant to them and shows why they’re more than just a clothing size. Her number, for example, is 15, because it’s the date that she left her agency.

“Maybe it’s the date you passed an important exam or the number of pets you have or the number of close friends you’ve got,” Howard told StyleCaster. “It’s not about what you look like; it’s about you as a person.”

People have begun sharing their special numbers on Instagram.

In her original viral Facebook post, Howard wrote “I will no longer allow you to dictate to me what’s wrong with my looks and what I need to change in order to be ‘beautiful’ (like losing one fucking inch off my hips), in the hope it might force you to find me work.”

Howard is already signed with a new agency that allows her work on her own terms, and, with this campaign, is hoping to encourage others to do the same.