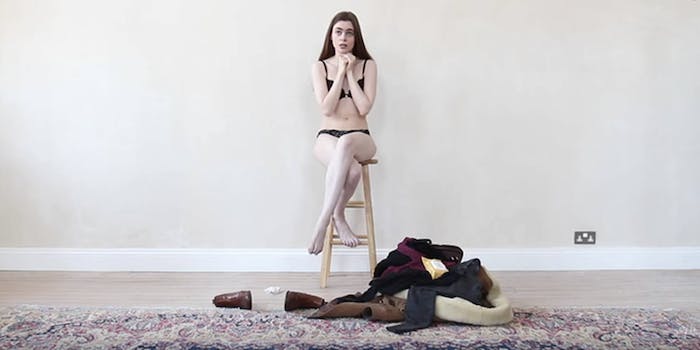 Charli Howard has been a professional model for years, but she really put her name on the map when she kissed her agency goodbye with a smackdown of a Facebook post in October. Now that the dust has settled, she’s come forward again to continue the discussion about the modeling industry’s harsh standards and being told, at a size two, that she was “‘too big’ and ‘out of shape’ to work in the fashion industry.”

The bold gesture—a “big FUCK YOU,” she called it in her post, telling her ex-agency “the more you force us to lose weight and be small, the more designers have to make clothes to fit our sizes, and the more young girls are being made ill. It’s no longer an image I choose to represent”—caught the eye of mother/daughter duo Elisa Goodkind and Lily Mandelbaum, the women behind the website StyleLikeU. In 2014, they pair launched the “What’s Underneath Project,” in which people of all shapes and sizes sit in front of the camera and strip down to their underwear while discussing what their bodies mean to them.

After great success with U.S.-based participants, the project recently traveled overseas to London, where Howard joined in. In her video, Howard talks about how she used to be terrified of eating salt—”I was terrified to go out for a meal…it ruined my relationship with my ex-boyfriend”—and points out specific moments, like being told she needed to loose two inches in one week, that made her realize that her agency’s expectations weren’t fair or healthy.

Howard is careful to clarify that she’s not looking to upend the entire industry, but rather broaden it. “What my issue is, is the fact that size-wise we say unless you are a certain size, you are not a model, because that is gonna fuck any person up who looks at that,” she says, “and we’ve got all these young girls with eating disorders and body-image problems. And we don’t question that. And we just keep doing the same thing over and over again. Beauty isn’t measured by a number.”

It was certainly a gamble, telling a major agency to take a hike. But in the end, Howard’s bold move paid off. She says in the immediate wake of the Facebook firestorm, she received multiple offers from other agencies to represent her. She landed with Muse Management, where she’s described as “a passionate animal lover and feminist.”

After London, the project will move onto Buenos Aires and South Africa where the StyleLikeU team will speak to more people about their journeys toward self-acceptance.