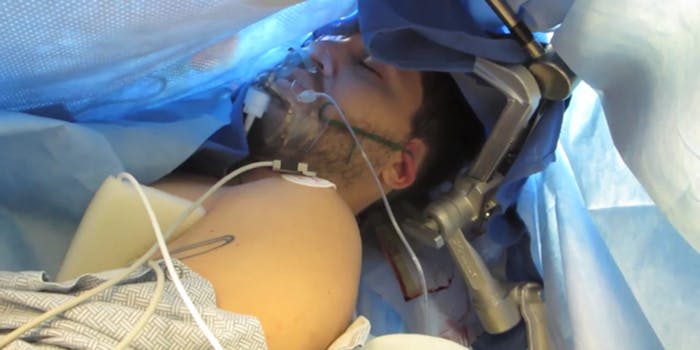 While Trippy’s brain was cut open and explored, doctors filmed the process.

Florida YouTube star Charles Trippy is known for his day-in-the-life webseries Internet Killed Television, which features his wife, Alli, and their dogs. Recently, those day-to-day videos have documented his health issues, and several trips to the emergency room and hospital, after being diagnosed with a brain tumor, which has been causing seizures since last year.

On Tuesday, he vlogged his latest brain surgery, a second attempt to remove the tumor. He was awake for it, and while Trippy’s brain was cut open and explored in a Boston hospital, doctors filmed the process. He even cracked jokes, at one point asking doctors if they can add some RAM to his brain.

Trippy is also trying to nab 1 million subscribers with the clip, and as of today, he’s pretty close. The video has more than 250,000 views.

This seems to be part of a growing trend. Recently, a man livetweeted his vasectomy, and a live surgery was transmitted via Google Glass.