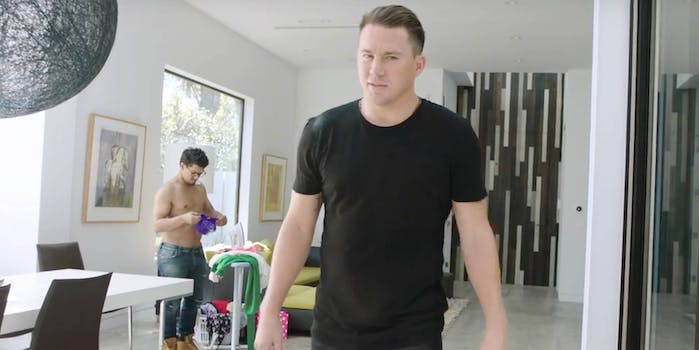 We accept Channing Tatum’s challenge: Our ideas for a ‘Magic Mike Live’ show

We have some ideas.

Between Ted Cruz dropping out of the presidential race and the endless “May the Fourth be with you” jokes yesterday, you may have missed the most important news of the day. That’s right, starting in March 2017, Las Vegas is getting its very own Magic Mike show. That sound you hear is a million women booking flights to Nevada.

It Happened To Me: I Bankrupted Myself To Go To Magic Mike XXL Live pic.twitter.com/SPwOF259AL

In a video that takes place in what we have to assume is Channing Tatum’s real house (littered with shirtless hunks), the actor muses on what the next step for Magic Mike would be, and asks, “What if we created a world in which women were given the same options as men have been given for centuries?”

The plan is to create a live Magic Mike show at the Hard Rock Hotel and Casino Las Vegas next year. However, Tatum needs your help! At the end of the video, he says, “We’re not mind readers, so please leave your comments and let us know what you want.” Here are a few ideas off the top of our heads:

2) That shirtless guy covered in puppies in the video isn’t a bad idea.

5) Channing Tatum says he won’t be part of the show (though he might join for a night or two if he feels in shape enough), but what about the other guys? Can we get Joe Manganiello onstage?

6) A scholarship program for women without the means to fly to Vegas to witness this cultural milestone.