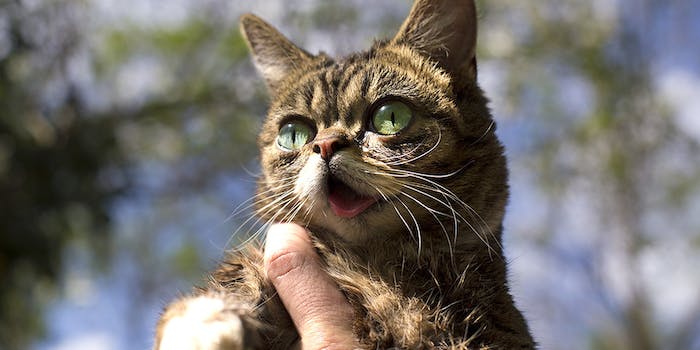 I can haz vicarious fame?

Meet the owners behind some of the most popular pets on the Web.

Tumblr has Tommy Pom, a popular Pomeranian that can typically be found at the company’s NYC headquarters. On Facebook, there’s Boo, deemed the “world’s cutest dog.” And for everyone else, there’s Grumpy Cat, who just last month landed a Hollywood movie deal.

These unsuspecting household pets have become household names, and their owner, in turn, have become unlikely managers and PR personnel, tweeting photos, sharing videos, and lining up press junkets for their little loved ones.

But what inspires someone to select carefully edited photos and videos of their cats? Was fame always the end goal or merely an opportunity sitting amid a silly obsession? As serendipitous as instant internet fame may seem, the level of celebrity upkeep requires anything but luck.

Meet Mike Bridavsky, the 32-year-old owner of Lil Bub, the Internet’s favorite underdog kitty and star of her own Vice documentary. He allocates roughly four hours each day to maintaining her superstardom: updating social media channels, answering Bub’s fanmail, and corresponding with the media.

“I love this cat, and I want her to be perceived in the way she deserves to be perceived,” Bridavsky, who also owns and operates a local music studio in Bloomington, Ind.,  told me. “It’s a job at this point; I definitely have work. We have trademarking, I spend a lot of time on the photos to make sure it looks good, and coming up with taglines takes some time to try to make it funny.

“I’m sort of a micromanager when it comes to my cat.”

Lil Bub, a wide-eyed “perma-kitten,” first gained Internet fame less than a year ago when her owner reluctantly posted some photos to his Tumblr page after a few nudges from friends. Within weeks, the images were picked up by Reddit, BuzzFeed, and ultimately Good Morning America, which flew the Midwestern-bred kitty to New York City and touted her as “The Cutest Cat in the World.”

These days, Bridavsky’s main focus has been prepping for the pet-owner duo’s new book for Penguin, Lil Book: The Extraordinary Life of the Most Amazing Cat On the Planet. Since Bridavsky received their advance—an amount he’d rather not disclose—he’s been pulling 14-hour weekdays for two months, selecting images from an archive of 15,000 photos and scheduling ongoing shoots with professional photographers. While his business is slowing down, Bub’s new ventures have come at a “refreshing” time in his life. 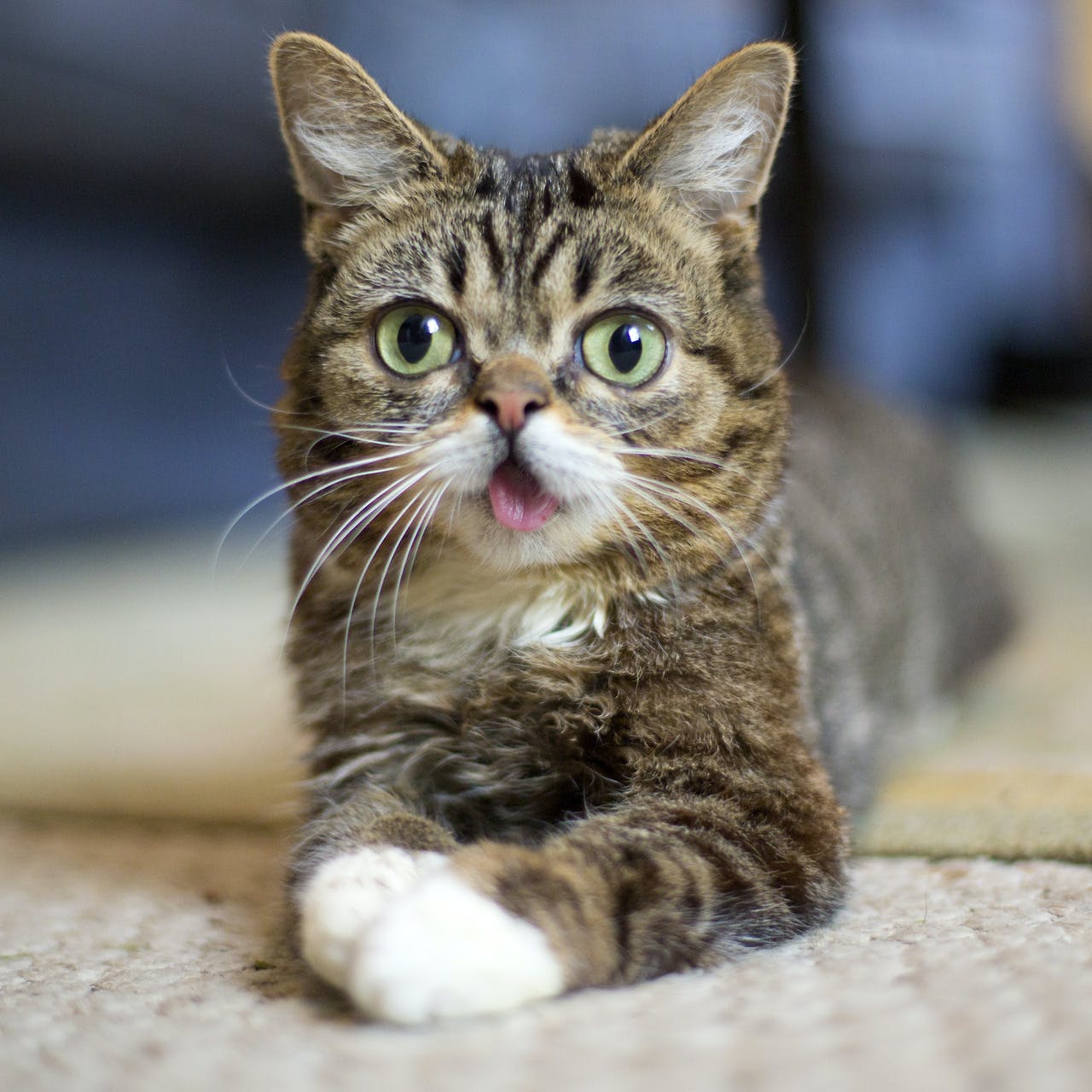 “It’s a really good foot in the door, and it’s because of Bub and people like her message,” he said. “It’s opened up a lot of opportunities for me.”

Bridavsky, who’s rarely seen in Lil Bub’s photos, is careful to not step into her spotlight.

That’s certainly the case for micro-celebrity pets, like Ramona the Love Terrier, helmed by current ReadWrite editor Owen Thomas, and Otis, the Corgi owned by Tumblr comic The Frogman.

“It’s about having something to sit outside of all the other crap we have in the world and in our lives,” Portwood-Stacer said. “It’s not political; it’s not going to offend your family.”

Unless, of course, the subject is Colonel Meow. Anne Marie Avey, who works as a comedian and commercial writer in L.A., took one look at her adopted Himalayan Persian and conceived a pretty ludicrous storyline:

“I have the purr of an angel and the roar of beast. “I am a descendant of Chuck Norris and Genghis Kahn. I drink, as well as bathe, in the sweet nectar known as scotch. I sleep with both eyes open. I read AND tweet. I am afraid of nothing, but birds can go to hell. Game of Thrones theme song plays every time I shit in a box. I don’t care what you think of me, I enjoy my butt scratched. And I don’t beg for food, I demand it.”

In August 2012, the 29-year-old took her act online, creating Colonel’s official Facebook page, which currently holds 161,000 followers (or, as Colonel prefers to call them, “minions”). Within two months, the cat was not only scouted by viral aggregators I Can Haz Cheezburger?, BuzzFeed, and Reddit but also appeared on The Ellen DeGeneres Show and Anderson Live. 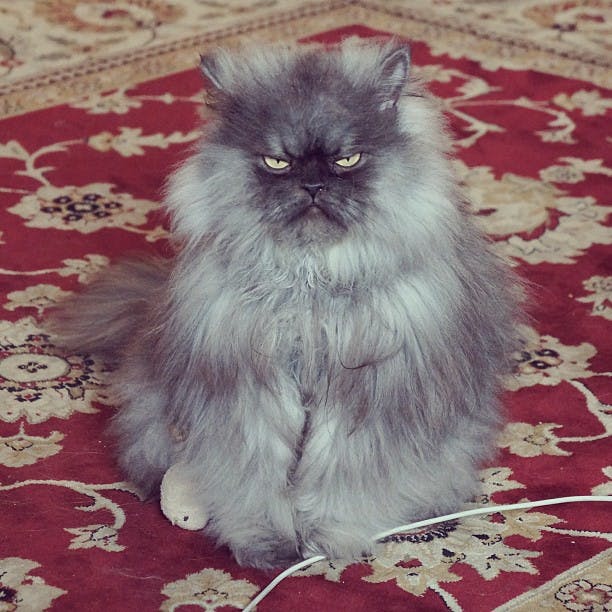 Avey, a former Theatre grad, and her boyfriend now spend five hours a day surreptitiously taking photos and videos of their cranky cat, editorializing, and uploading them to all their online outlets. A recent video of the disgruntled Colonel perusing through Facebook featured his arch-nemesis Boo. “F***in hipster,” the crude cat commented on the pup’s picture.

As savvy and crafty as Avey appears, the self-proclaimed “starving artist” did not see her career panning out this way.

Avey, who’s met and worked with Bridavsky (yes, Colonel and Bub met in real life, and yes, it was epic), believes the virtual world is an online dog park for cat owners.

“There are those crazy moments when you can expose them,” she said. “And you share it around the world. I can show people how cool my cat is.”

Viral fame occurred for Corgnelius, arguably the cutest corgi to hit the ‘net, after a trip to an actual dog park, where the stubby-legged pup sized up to a large German Shepherd. More than 406,000 people watched the 55-second clip. Likewise, a photo of Corgnelius in a Legends of Zelda costume, the result of a random and naïve gesture, was quickly picked up online and eventually in an editorial spread in Marie Claire.

Susie, Corgnelius’s quiet owner and stage mom, joed that she prefers to keep her identity under wraps for a fear that her boss might find out she’s been editing and posting pictures of her dog on her company computer. (She recently adopted another pup, Stumphrey, that’s been well-received on Facebook.)

“I didn’t know it would get viral,” Susie, a 28-year-old Los Angeles resident, laughed. “I just like dressing him up ‘cause he’s so cute in little clothes!” 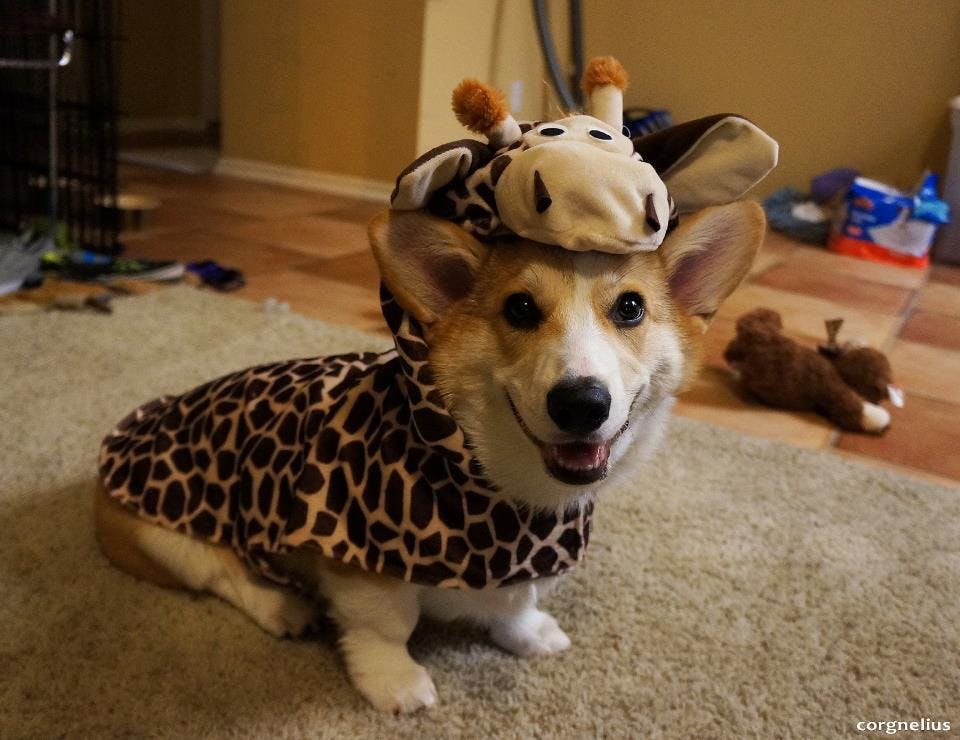 With a little under 7,000 Facebook friends, half-a-million YouTube hits, and a wardrobe of pint-sized outfits, his owner has no long-term vision for superstardom.

“They keep telling me to ‘beat Boo,’” Susie said of her friends. “But it’s nothing like that; I have no set agenda. Even if he loses all of his followers, I wouldn’t care. I’d still keep posting pictures of him.”

Correction: An earlier version of this story reported that Susie lives in the Bay Area. She resides in Los Angeles.