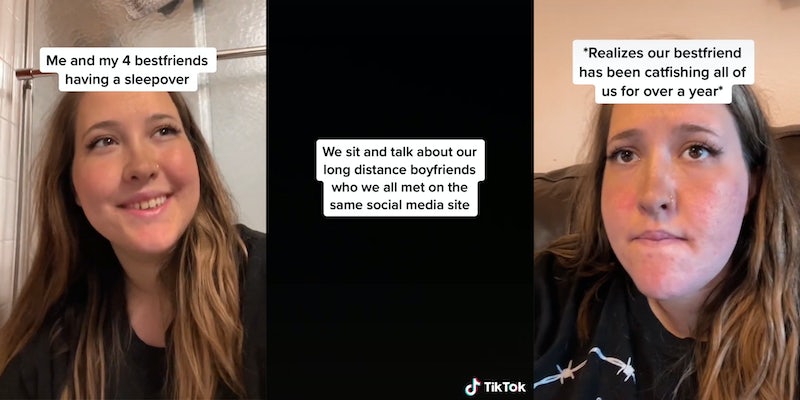 ‘Sucked so bad’: Girl catfished four of her friends, pretended to be long-distance boyfriends

'Everyone was catfishing like no other cause it was easy back then.'

A TikToker says that her friend catfished her and three other friends by posing as four different boyfriends.

In a TikTok posted on Friday, Lea Dallas (@legendofleaa) says that when MySpace and AOL Instant Messenger were popular, she and three of her friends had long-distance boyfriends whom they had met online.

When sleeping over at another friend’s house, Dallas saw that the friend had logged into the account of her boyfriend and the boyfriends of her three other friends.

Dallas says in that moment, she realized that her best friend had been “catfishing all of [them] for over a year.”

In the video’s caption, Dallas wrote that the situation “sucked so bad to go through.” On Thursday, her video had almost 6 million views.

In follow-up TikToks, Dallas says that she never found out why her friend catfished the group and that she remained friends with her for over five years after the incident.

Many comments on Dallas’ video ask her to tell the whole story in depth, which she has chosen not to do because the friend that catfished her received hate after Dallas posted her viral video.

“I can’t share my side of the story without sharing their sides of the story,” Dallas said about the friend that catfished her.

Others questioned how she was able to be catfished for so long. Her response is that video chatting wasn’t possible because the incident occurred in the early 2000s. Plus, the term “catfish” didn’t originate until 2010 with Nev Schulman’s Catfish documentary.

“The glory days,” Dallas wrote in the caption of another follow-up TikTok. “But everyone was catfishing like no other cause it was easy back then.”

Commenters on Dallas’ viral video shared their horror stories about being catfished.

“My friend was pretending to be me online to talk to people we went to school with,” @lexiezint wrote. “Many confusing interactions afterwards.”

And one commenter even shared a catfish happy ending.

“I had a friend pretend to be her cousin and I fell in love with her that way,” @crystalplumadore commented. “So when I found out I just started dating her.”

The Daily Dot reached out to Dallas via TikTok comment.