Catcalling starts for most women before age 17, study says

Catcalling is apparently a worldwide problem.

Catcalling was the social justice issue of 2014, with woman of all shapes and sizes coming together to share their personal street harassment stories. But a new study has found that street harassment begins even earlier than you’d expect. For most women, it starts before the age of 17. 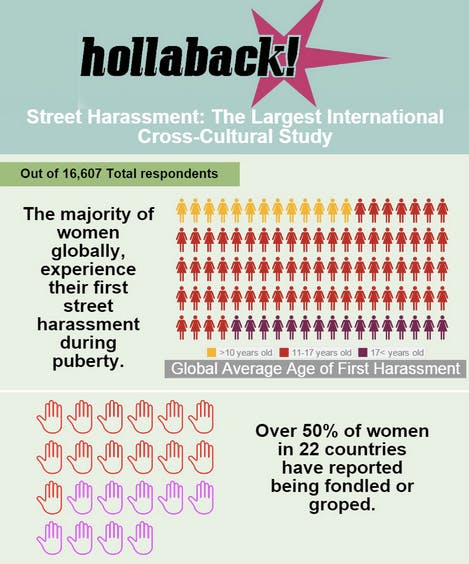 According to Hollaback!, the non-profit organization behind the now-infamous New York City catcalling video, 85 percent of American women reported that they had been catcalled before the age of 17. When you look at the data from specific countries, such as Argentina, that number bumps up to a shocking 95 percent. 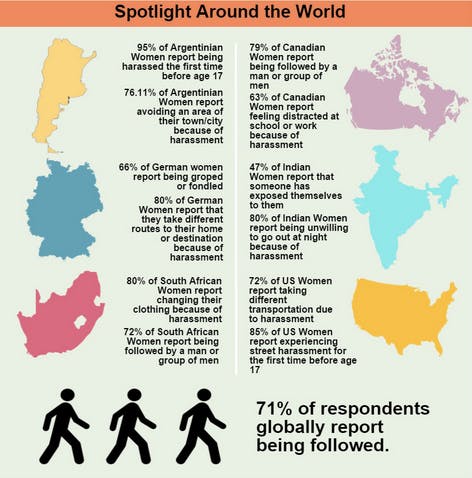 Now, women are sharing their stories about being harassed at a young age, using the hashtag #firstharassed. The hashtag was created by writer and activist Mikki Kendall, who asked women to share their stories.

“I started the conversation because I noticed a trend in a conversation on Tumblr about harassment, and I wanted to know how for how many women street harassment started as children. It turns out it was a lot of women,” Kendall told the Daily Dot.

The scariest part of the stories shared in the #firstharassed hashtag is that many of them aren’t just describing harassment. Many of the tweets describe far more serious forms of assault, including, in some cases, rape and molestation.

#firstharassed is necessary for highlighting that for most women sexual harassment begins while we are children. We're socialised into fear

Naturally, as is the case with any online movement focused on female empowerment, men’s rights activists, or MRAs, have been trolling the hashtag. They’ve been making their own contributions to the conversation, their tweets peppered with misogyny, racism, and hate.

I thought Fantasy land no longer existed, Thank you #firstharrased for showing me its still alive and well

i was #FirstHarassed at birth, by the pressure of being a white man, and thus superior to every other creature on earth.

It’s also prompted some hate from those who believe women should be focusing on other issues.

I can't believe #firstharassed is a thing. Such an awful way of viewing the world & others if ur always focused on the past. #EndFeminism

There are women getting acid poured on their faces in the Middle East and you're bitching about getting cyber bullied? OMG. #FirstHarassed

Kendall says she tries to pay the haters no mind. “The trolls think they can hijack the conversation by drawing attention to whatever awful garbage they post, and I think we can render them largely powerless by ignoring them in ways that they can’t penetrate easily,” she said.

But despite the backlash #firstharassed has generated, the hashtag has sparked an important conversation about sexism and the insidious nature of street harassment. And the Hollaback! study has also helped to further illuminate the issue.

“This is a global problem. This really points to the fact that it is a global epidemic,” said Debjani Roy, deputy director of Hollaback!, told the Daily News. “More people are able to recognize this as a problem, rather than something that just happens.”