Can my spazzed-out cat be calmed by YouTube cat music?

For a while, Dot was fine. A little shy but still willing to be pet. And then one day, nothing. She’d sit near us, but every time we tried to touch her, she ran away. If we had to catch her to take her to the vet or, recently, to move, she would relieve herself on the floor.

Dot is, basically, one freaked-out cat. 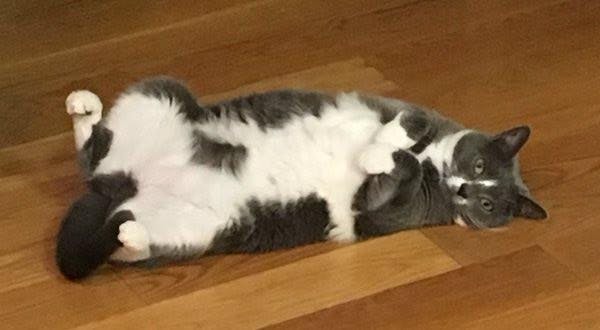 We’ve tried pheromone plug-ins, different types of food, hugging her in a towel to make her feel safe. None of it has worked, and as I wistfully watched my friends play Neko Atsume, I worried I could only find a chill cat in cyberspace.

But there was one thing we hadn’t tried yet—music.

A quick search on YouTube for music to relax cats brings up hundreds of videos, featuring images of babbling brooks and sleeping kittens, a promise of the bliss that awaits you at the end of a two-hour track. Most are not uploaded by individuals, but by channels such as Relax My Cat and Sleep Music Relax Zone, pointing to a mini-industry dedicated to chilling your cat out. And most of the time, it’s totally free.

There is some science behind what sounds can relax your pet. According to Music for Cats, which successfully Kickstarted a CD of “pet sounds” (sorry) earlier this year, “Felines establish their sense of music through the sounds heard after they’re born: birds’ chirping, or their mother’s purr.”

Based on that premise, musician David Teie composed music inspired by cats’ vocalizations and matching purr frequencies. “An independent study conducted by researchers at the University of Wisconsin and published in Applied Animal Behavior verified that Music for Cats resonates conclusively with its audience,” Music for Cats says on its site.

However, what is considered “relaxing” is still very subjective, and some YouTube channels are leaving it up to experimentation to figure out what cats like. Amman Ahmed of Roundwaves, which runs the channels Relax My Cat and Relax My Dog, told the Daily Dot his company relies on audience feedback to see what pets are responding to.

“In early days, we had this thing called sound sweep, which was this annoying high-pitch-to-low-pitch five-second sound, and most people said it annoyed their dog, but a few people said it worked. And we experimented with different sound-sweep frequencies, and it would work on some breeds and not others.” The same goes for its music directed at cats, which regularly incorporates noises like birds chirping, fire crackling, and running water. “Our objective is to put everything out there.”

All of Relax My Cat’s music is available for free on YouTube. Because the company relies on user reviews to see what works, Relax My Cat is able to let the market decide whether they’re experts or not, rather than back it up with scientific evidence. “I think advertising revenue works really well for us,” said Ahmed. “If we were to purely sell the products, we’d have to add value behind it and say we had all this scientific research behind it. But for us, it’s completely free. Listeners have nothing to lose.”

Ahmed says users regularly send him videos of the music “working” on their cats, which he’s also uploaded to YouTube.

The problem is, it’s hard to tell just what “relaxed” looks like for a cat. According to a few online resources, a relaxed cat’s ears will point slightly forward, her tail will be visible, and she may be splayed out on the floor. Which, unfortunately, is what my cat often looks like when I’m not trying to touch her.

When I asked my friend who had recommended cat music to me in the first place just how she knew it was working, she admitted she didn’t know. “It feels like it works for him, but to be honest, I have mostly played the music when I was already either sitting on the couch or in bed, which is when he normally curls up next to me and sleeps,” she told me, though she said she tried playing Chopin for the cat and he did not like it. Clearly, cats do have opinions.

My cat certainly did react to the music. When I first put on Relax My Cat’s “8 Hours of Relaxing Music for Cats,” Dot was sitting under the coffee table, and after about 10 minutes, she got up and started walking toward her food. She could have been lulled out of a terrified state and made comfortable enough to eat. Or, she just could have been hungry.

Sleep Music Relax Zone’s “Pet Therapy: Relaxing Music for Cats and Dogs,” on the other hand, frazzled her a bit. As soon as this came on, her paws began to twitch and she sat up and looked out the window. The music involved the sounds of birds, during which she looked back toward the computer, but if anything, the chirps were competing for her attention with the construction racket outside, and the whole thing seemed to stress her out. She eventually moved back under the coffee table, though she kept jerking her head toward me whenever a certain high note played.

If anything, the chirps were competing for her attention with the construction racket outside, and the whole thing seemed to stress her out.

Sleep Music Relax Zone’s “Sleep Music” version seemed to work, though. Dot was sitting up when this started playing, staring at my other cat, who was asleep on a chair. At first, Dot looked nervous, but after about five minutes, she was at least laying down on the floor.

When I played Music for Cats, the one you have to pay for, Dot was eating, and stopped to turn her head toward my computer—though she did it slowly and seemingly without alarm. She then sprawled out on the floor. The music appeared to be working. But it was a free 30-second clip, and as soon as it was over, she got up again.

In the end, none of the music soothed Dot enough to let me pet her.

But I wasn’t necessarily duped. “We don’t want to be those people trying to claim this is magic music,” said Ahmed about why Relax My Cat offers its music for free. “We have done years of study, but it’s been experimental.”

This is precisely what makes these YouTube channels so appealing to so many people. At best, your cat is relaxed and your feedback may help create even better music than before; at worst, your cat is exactly the same, at no cost.

Even if there is music scientifically designed to work, YouTube facilitates a collaborative process, one that probably doesn’t produce better music than years of research would, but one that feels better for the user. There’s the chance of the thrill of discovery, that you found the one piece of music that works on your cat, not one that an expert said you would.

My cat is no better than before, and she, like many people I know, will likely deal with this anxiety her whole life—no matter how I try to help. But at least now I know she gets confused by bird noises.