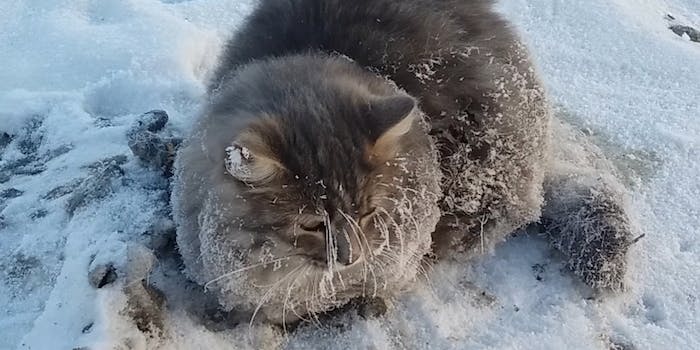 Cat found frozen to the street in -35-degree temps

Don't worry, this has a happy ending.

A cat trying to escape a bitter Russian winter was discovered frozen to the ground recently—and at first, it didn’t look good for the poor guy.

The cat ended up in that predicament after going underneath a warm car to sleep, but by the time a couple found the cat in -35 degrees Celsius (-31 degrees Fahrenheit) temperatures, she was unable to move. In an attempt to save her, they used warm water to melt the snow and ice to dislodge her. And the brave kitty handled it all like a champ.

While we don’t see it on film, this story does have a happy ending. In a followup comment, the person who uploaded the video said that the cat, estimated to be about 7–9 months old, was taken to a veterinarian and started walking only hours after being rescued. A few days later, she was adopted. Hopefully, she’s being kept warm and toasty indoors.