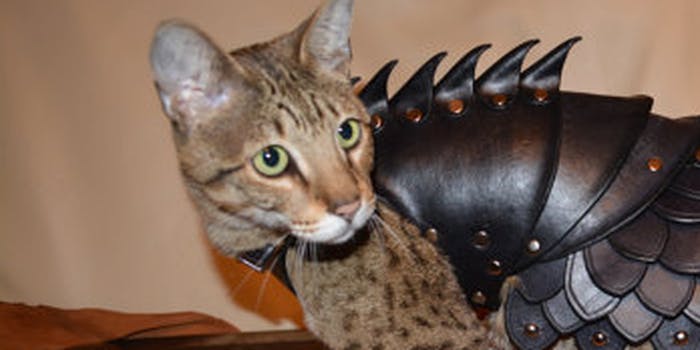 Because your cat can't got to war in just his fur.

Cats have evolved as hunting machines, but you wouldn’t know it from domestic kitties today who spend most of their time eating, sleeping, and trying not to look guilty when you catch them eating their own vomit (J’accuse, kitty. J’accuse).

If you fear your furry friend has gotten too complacent, turn that sluggish kitty back into a bloodthirsty warrior with this leather cat battle armor, available for $600 on Etsy. 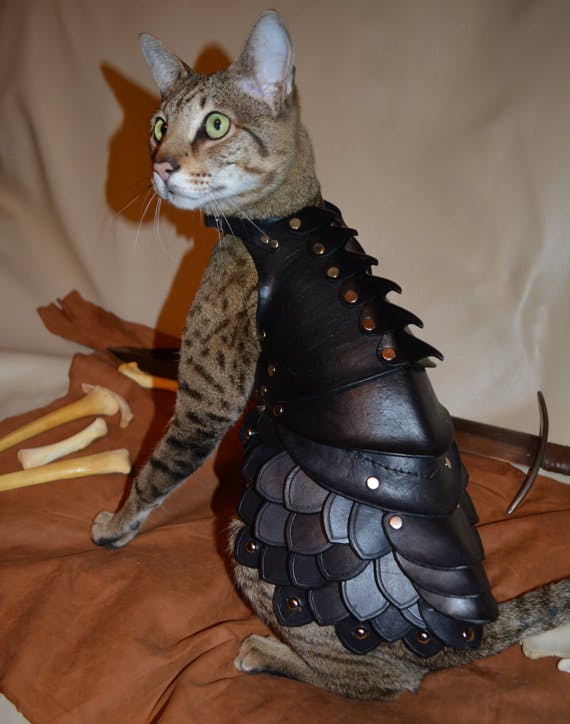 The garment also features grommeted, corset-style lacing “for a secure, comfortable fit” and a ring at the torso for an optional leash.

Shockingly, this is not the first time someone on the Internet has designed battle armor for cats. In 2008, a Canadian artist named Jeff de Boer designed a chain-link cat battle costume made of nickel, aluminum, leather, and brass for his “Cats and Mice” series. Yet de Boer apparently did not attempt to put the garment on the market—a great loss for the burgeoning feline military apparel market, but a gain for Schnabuble and her Savannah cat Selani, who is featured as a model on the Etsy listing for the body armor (she does an OK job, but goes a little heavy on the smize, IMHO).

At $600 for what looks like a miniaturized version of a renaissance fair costume, the garment is pricy, even if it turns its wearer into “an unstoppable force for slaughter,” as Schnabuble promises in the Etsy listing.

Yet for those who’ve always dreamed of re-enacting the Arya/Syrio Forel Game of Thrones sword-fighting scene with their pet, the cat body armor is a must-have.