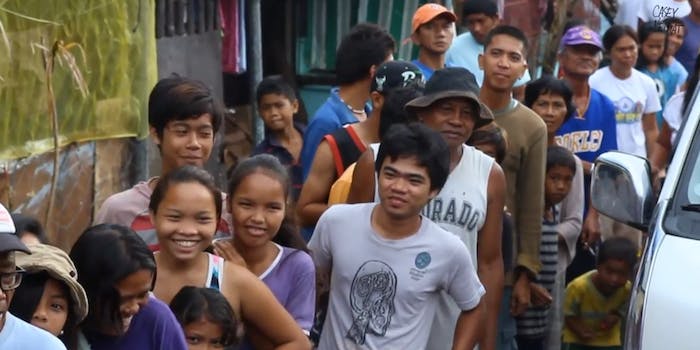 This filmmaker spent his entire budget on Typhoon Haiyan relief

The studio wanted him to make a promo film. He had something different in mind.

Filmmaker Casey Neistat was contacted by 20th Century Fox to make a promotional film for The Secret Life of Walter Mitty. The studio wanted him to take a budget of $25,000 and make a video about chasing your dreams.

But having received the assignment a few days after Typhoon Haiyan tore through and devastated much of the Philippines, Neistat had something different in mind.

“Here’s my concept: Give me the budget, I’ll go to the Philippines, and spend every penny helping people in need,” Neistat said as he read his actual response to 20th Century Fox.

The studio agreed. Three days later, Neistat and his friend Oscar were on their way to Manila to begin their journey.

anyone know anyone in Manila who knows how to make shit happen? organizing a aid mission.

By traveling to the Philippines on a whim to help those in need, Neistat may not have created the promotional film 20th Century Fox pitched to him, but it’s hard to argue with the end results.

True to his word, he spent the entire $25,000 budget on food, water, medicine and supplies for some of the hardest-hit villages that still need help with the rebuilding process. Neistat and Oscar ended up visiting 35 villages and provided over 10,000 meals for victims.

“Never have i met such people with the resilience of these typhoon victims,” Neistat wrote in the video description. “there was one thing that stuck out, one big huge tiny thing, that was; of everyone we were face to face with, thousands of people, not once, at anytime for any reason did anyone complain. no one. their focus was on rebuilding and healing, not sympathy.”