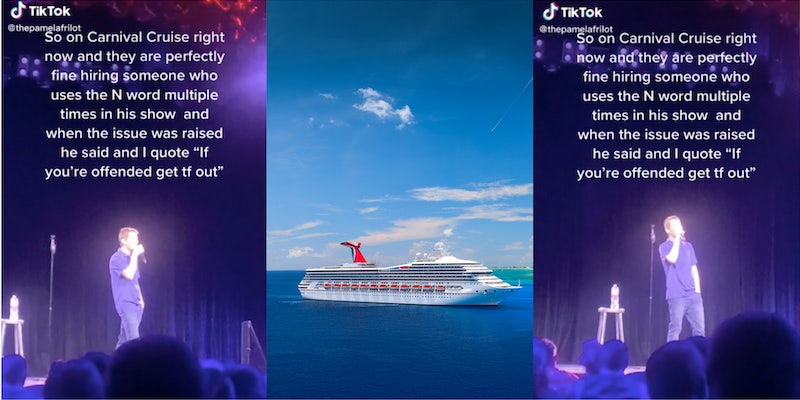 ‘If you’re offended get tf out’: Carnival Cruise comedian called out for allegedly using N-word during his set

A woman is using TikTok to call out a comedian on a Carnival Cruise for allegedly using the N-word during his show.

The woman, named Pamela Frilot (@thepamelafrilot), says comedian Rob O’Reilly repeatedly used the slur before telling audience members to “get the fuck out” if they were offended. One of Frilot’s recent videos shows a six-second clip of the comedian on stage, but the video has no audio.

“So on Carnival Cruise right now and they are perfectly fine hiring someone who uses the N-word multiple times in his show and when the issue was raised he said and I quote ‘if you’re offended get tf out,'” the video’s on-screen text reads.

Get me off this ship!!

In another video, Frilot explains that she doesn’t have a video of the comedian saying the N-word because audience members were asked not to record at comedy shows. She willingly complied with the request until O’Reilly’s alleged slurs.

Viewers applauded the TikToker for coming forward, despite some users saying it was “odd” that she didn’t have audio of the comedian saying the N-word.

“Idk why people want proof or the actual audio of him saying it. Why can’t you believe her? This man is doing stand-up on a cruise,” one viewer commented. “Why are ppl trying to give him the benefit of doubt. He’s no one and ppl wanna believe he might be innocent.”

“Sister you’re giving period thank you for sharing that video and spreading the awareness!! WE GONNA HELP U GET HOME SAFE GIRLIE,” another viewer commented.

An IMDB page lists O’Reilly as a comedian with appearances on Comedy Central’s Live at Gotham, NBC’s Last Comic Standing, and on the Tonight Show as Jay Leno’s correspondent. His Twitter and Facebook accounts appear to be either deleted or suspended.

A Carnival Cruise Line spokesperson told the Daily Dot via email that O’Reilly’s future appearances have been canceled.

“We do not tolerate this language or behavior,” they wrote. “The person in question will no longer be welcome on Carnival ships and the rest of his scheduled appearances have been canceled.”

The Daily Dot reached out to Frilot via TikTok comment.