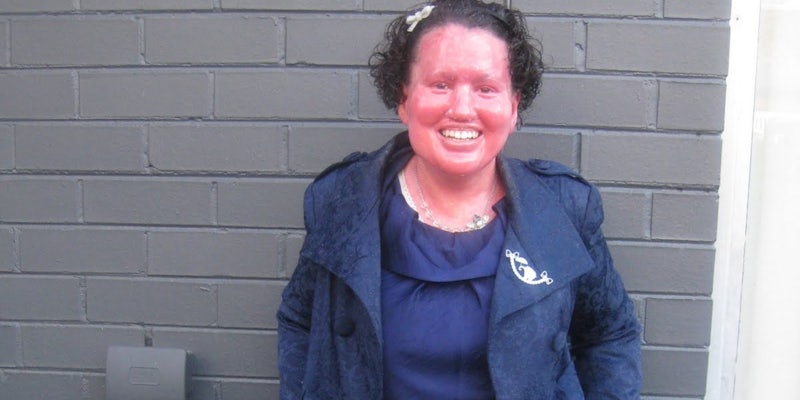 How to defend yourself when your photo is ridiculed on Reddit

This morning I discovered that someone had posted a picture of me on Reddit, in the WTF [forum]. 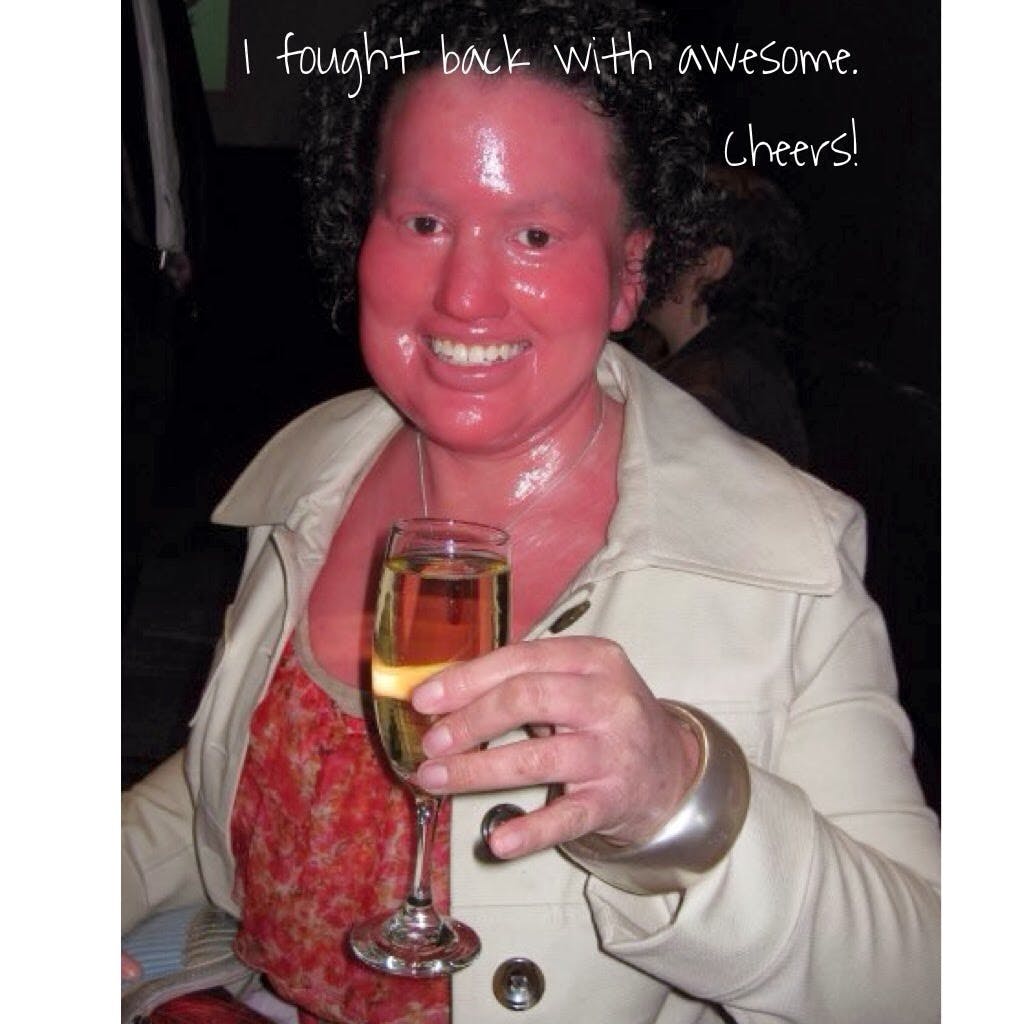 I was going to write a rant. But I’m tired. Plus it’s better to be nice in situations like these. And I can’t take on any more of the Internet today.

This morning I discovered, through my blog statistics, that someone had posted a picture of me on Reddit, in a forum called WTF. My photo made them say, “What the fuck?”

“WTF is that? Looks like something that was partially digested by my dog.”

“I dated a girl with a mild form of Ichthyosis once.Thankfully she was Filipino so her skin was naturally brown, otherwise she’d be as bright red as her. I thought her skin was cool.. it certainly wasn’t unpleasant, but had a nice texture. Plus her boobs felt like underinflated basketballs… Very fun to squeeze :)”

“Seeing people like this smile makes me uncomfortable. It looks like a lie; they are only smiling in an attempt to fool themselves that their lives aren’t horrible. You can see it in her eyes. The same rehearsed dead-eye mouth-smile in all her pictures. Gives me the willies.”

(That photo was actually taken on one of the happiest nights of my life, when I met the Rush cast.)

And there were countless diagnoses (so many people educated by Dr Google) and assumptions of sunburn. They annoyed me a lot.

Then I looked further and there was SO much support. People had linked to my blog and become educated. They’d called out the nasties. There were SO MANY positive comments about my appearance. One person said I look like Geena Davis:

“There, but for the Grace of God, go I. Parents, teach your children not to laugh at people that aren’t what society deems as “perfect”. That’s my sermon for the day, keep your comments to yourself if you don’t agree with me. I don’t need any help, thanks tho. Except for her condition she has a smile that makes her look like Geena Davis.”

One guy said he wishes he hadn’t missed his chance to ask me out on a date.

And this guy, he was a standout:

“You, madam, are the strongest motherfucker I have ever HEARD of, let alone met. If you are ever in boston, i would be honored to buy you a beer.”

And then I posted this response. 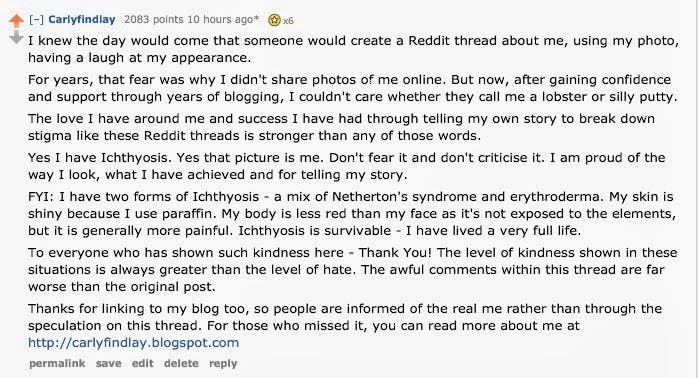 The original poster gave me an apology. A bit backhanded, but I thanked them all the same. 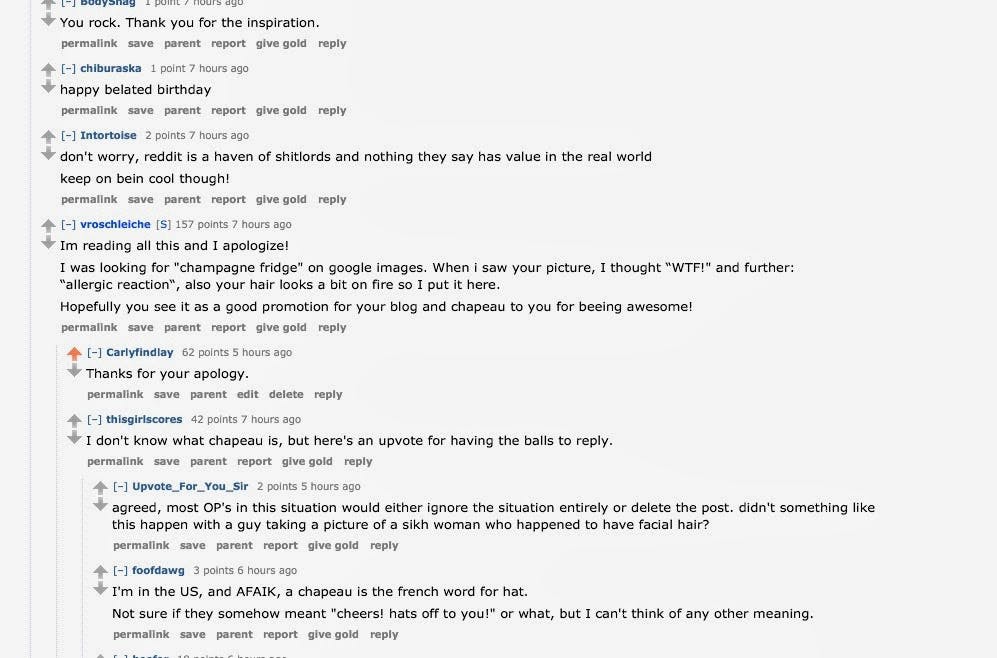 “Im reading all this and I apologize!

I was looking for “champagne fridge” on google images. When i saw your picture, I thought “WTF!” and further: “allergic reaction“, also your hair looks a bit on fire so I put it here.

Hopefully you see it as a good promotion for your blog and chapeau to you for being awesome!”

I felt a bit sick. So many people dissecting my photo on the Internet. But then I remembered.

When this picture was posted overnight, I was content lying in the arms of my love, having just seen a band and eaten a great meal—a night filled with laughs, and these posters were making fun of a stranger on the Internet. I think the location of this post, and the title is a clear indication of the original poster’s intent. However, I say the others who joined in with the ridicule and the armchair diagnoses are just as voyeuristic. 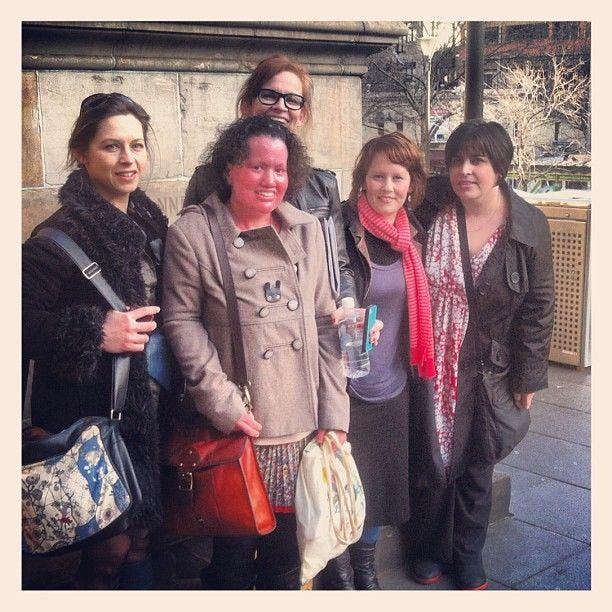 I am resilient. I’ve got thick skin. These are just words on a screen. I am safe and loved, strong and intelligent, and can fight back with awesome.

But I worry for those who can’t. What about those people who are mocked online and do not have the strength or words to defend themselves? Or even continue living?

This isn’t just curiosity or having an innocent laugh. This is the ridicule of a stranger en masse. Think about how that impacts a stranger. Their parents, their partner, their children. Stop being a coward behind a screen. Get out there and experience people of all types.

Today’s comments on Reddit showed me that the Internet is full of pretty awful people. But it also showed me people are so kind, and are willing to learn.

Thank you to everyone who went in to bat for me. Thank you. One of my worst fears happened and I smashed it! Fighting back with awesome wins every time.

Visit these pages to see how I live with ichthyosis, resources, and that I live a great life: