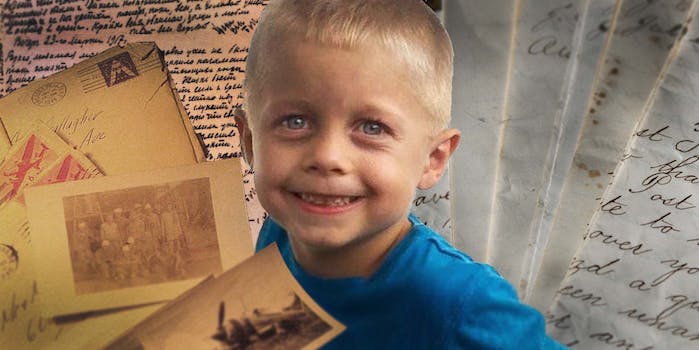 #CardsForDanny campaign helps this little boy have a better birthday

The good side of the Internet shines again.

Danny Nickerson is turning 6 on Friday. But he’s not looking to have a massive birthday party or get a pile of new toys. What he really wants is mail.

Nickerson, a Massachusetts native, was diagnosed with a rare and inoperable brain tumor this past October and has since stopped going to school. Unable to play with his fellow kindergarteners, Danny can get lonely. But there’s one thing that always lifts his spirits: getting cards with his name written on them.

“He can recognize his name now,” Danny’s mother, Carley Nickerson, told ABC News. “When he saw his name on the package from magical fairies on Easter, he was so happy.”

Since then, the packages have stopped and the chemotherapy treatments have intensified.

“He had 33 radiations from November through December last year,” Nickerson’s mother said. “We are now getting chemotherapy every two weeks.”

Less than 10 percent of the children diagnosed with this type of cancer live longer than 18 months, but Danny’s mom remains hopeful.

“I don’t really believe in that. He is doing great,” Carley Nickerson said. “Every day is a blessing for us.”

Now, as Danny gets ready for his birthday on July 25, his story has gone viral. Social media has caught on, with the hashtag #CardsForDanny spreading quickly through Facebook, Instagram and Twitter.

Can’t get cooler than a card that comes with a musical super hero wrist band right? #cardsfordanny @stoolpresidente pic.twitter.com/XklZVt5THG

Took less than 10 minutes. Not the best, but it’s off to Massachusetts! I even pitched in some cash(: #cardsfordanny pic.twitter.com/ocFK1RRssz

And as a result, people from all over the country have been sending the little guy some awesome birthday cards. “I gave him to key to the P.O. box,” Carley Nickerson said. “He was so excited when he opened it.”