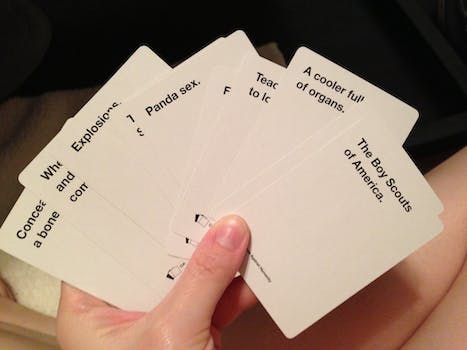 New site lets you play Cards Against Humanity for free

This could change everything.

If you’ve ever played the highly addicting Cards Against Humanity game with your friends at a party and thought, man we should do this more often, then you’re in luck. Someone created a Web service that lets you play the game virtually with anyone.

Cards Against Originality is a website built by Dawson Whitfield, a Web designer based in Toronto, Canada. It allows people to play all expansions of Cards Against Humanity—popular for being a “party game for horrible people”—using a smartphone, tablet, or Web browser. Anyone can actually download the original game for free given its Creative Commons license, so Whitfield was able to create the unofficial portal that allowed gamers to enjoy it online without legal entanglements.

Cards Against Originality is not an actual app, but you can start a new game and share a link with your friends whenever. As long as you have the link stored somewhere, you can close the page and do other things—the game will be right there waiting when you return.

Naturally, we were very eager to give the online game a whirl. The site had instructions that said players still needed to play near each other IRL, but Whitfield says there’s no reason why you can’t play with your friends from different locations. “It’s technically possible to play remotely, but it’s designed to be played in the same room. I actually had a game with my friend across the country while on speakerphone,” Whitfield shared in an email to the Daily Dot.

As the person who started the game, I had the option to elect myself the judge while waiting for other people to join, courtesy of a link the site generated for me to share. I excitedly waited while some of my colleagues hopped on to the game.

We never got to play it, unfortunately. After a few unsuccessful tries of loading the page, this is what happened to the site.

The only obvious explanation for this heartbreaking downtime is that people on the Internet quickly got wind of the existence of this website, eagerly started new games with their friends, overloaded the server, and almost immediately crashed the system.

“I was not expecting [Cards Against Originality] to get so much traffic,” explained Whitfield. “We upgraded to the biggest server my host had, but that went down, too. We’re currently switching to the same host that all the big web companies use.”

Whitfield expects his site to be back to normal on Thursday by 12pm EDT.

Update 8:07am CT, Mar. 12: Responses from Whitfield were added to the piece.