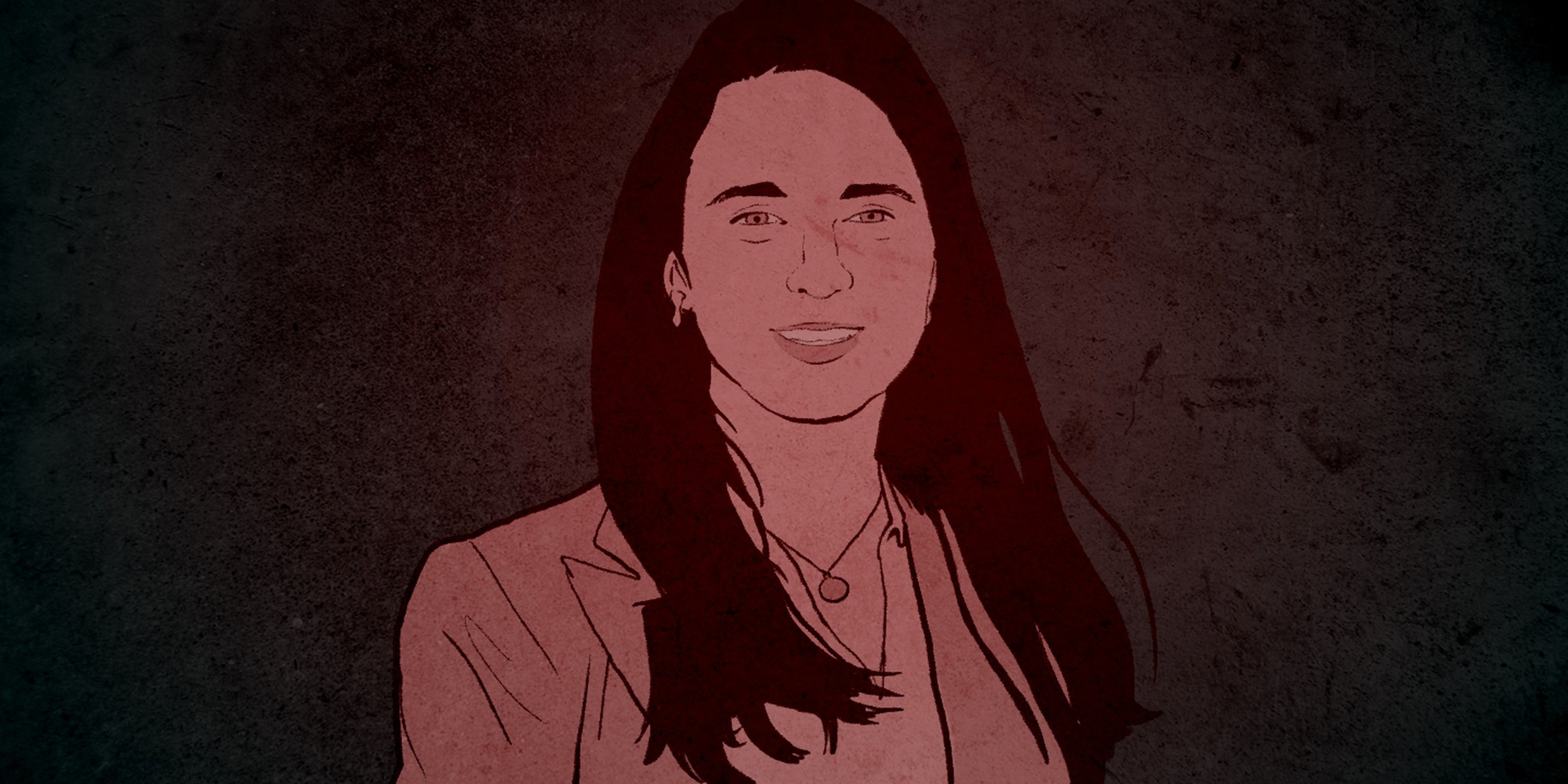 Q&A: This is why I went off on Florida Gov. Rick Scott at Starbucks yesterday

In a lengthy interview, Cara Jennings explains why she blew up at Florida's governor.

Cara Jennings is a force of nature.

Total disclosure: Cara is an old friend of mine. We spent our twenties traveling to many of the same protests, in an activist performance-art troupe called the Radical Cheerleaders that Cara founded in the late 1990s with her two sisters, Aimee and Colleen. As a young civil rights movement within itself, radical cheerleaders were often found yelling loudly about things like feminism, environmental justice, and labor rights at anyone who was within earshot.

So it wasn’t much of a shock when I logged onto Facebook Tuesday night to discover that a video of Cara had gone viral—a video in which she reads Florida Gov. Rick Scott to filth in a Gainesville Starbucks. I hadn’t seen Cara in years, but there she was, the same fiery, unstoppable anarcha-feminist I remembered so fondly.

In the years in between, Cara Jennings was the first anarchist elected to public office in Florida, becoming a Lake Worth city commissioner in 2006 and inciting controversy when she refused to say the Pledge of Allegiance in office. Though she has traveled the world, Cara still lives in Lake Worth, the small town near West Palm Beach where she and her sisters grew up. Now a working mom who does contract work for the Service Employees International Union (SEIU), she resides in an anarchist collective house known as a crash pad for activists passing through the area. Her erudite criticisms of both local politicians and global issues frequently make the news.

She spoke with the Daily Dot by phone on Wednesday amidst a media frenzy that had descended after the Scott video exploded in popularity online.

Cara, you are very viral today. Are you being hounded by the press?

I have a Fox interview in 15 minutes, but it’s Fox so, you know, what do I care? I have 15 unread text messages that are all reporters, and I have a list of five that I haven’t called back yet, too.

I understand that the video started recording after your conversation with Gov. Scott was already under way. What had been said before the video?

It started out very calm. I saw his profile and wasn’t sure if it was him. So I just said, “Governor Scott,” and he turned towards me. I asked, “Why did you pass that awful law last week that impacts women’s healthcare choices?” And he said, “I don’t vote on bills,” which is so incredibly disingenuous. If I didn’t understand the political process, at that point I would have thought, “Oh, I got the information wrong,” and I would have dropped it. But he didn’t even own up to the fact that he passed this bill.

So I said, right you don’t vote—but you have executive authority to sign bills into law. And this bill you signed into law is very harmful to women like me, who rely on women’s health services like Planned Parenthood. And he said, go to your county health clinic then.

So I have the governor of the state of Florida telling me which healthcare provider I should go to, in a coffee shop. Completely inappropriate. And basically where the video picks up is when I respond by saying, “You’re an asshole.”

At which point everyone watching this video starts to lose it with laughter. And this video, it kills me, because I know you—and anyone who knows you knows that you are fearless when it comes to these confrontations, but this time there just happened to be a camera nearby.

The thing is…I’m like, really? This is the video that goes viral? I’ve been much more poised and articulate many other times. [laughs]

Why confront the governor in person, as opposed to an online petition, or whatever people would normally do?

Well, you know, 12,000 people signed a petition opposing this bill that was delivered to the governor. And for months, people have been trying to meet with him at the capital in opposition to the bill. I’ve been in Tallahassee before to try to meet with him on immigration issues with over 100 of his constituents, and he’s refused meetings.

Around the time when Florida was moving forward with a copycat bill of the Arizona anti-immigrant SB 1070 legislation, I was part of a group of people that were going to Tallahassee weekly to try to meet with the governor and he refused to meet with us.

So in some way, I guess, the only way you can get Governor Scott’s attention is if you happen to run into him at Starbucks. Because if you try to meet with him as a constituent, good luck. And that is the reputation he has.

Tell me about another time when something like this happened and there wasn’t anyone there recording it. What other confrontations have you had with political figures?

Girl, I hope you have a long piece of paper! [laughs]

Yeah, I mean, I believe in engaging people who have the political power to make decisions that affect our lives. So, I try to do that. In this situation, I just happened to stumble upon Governor Scott at Starbucks.

But in other situations…for example I was at the RNC [2012 Republican National Convention] in Tampa a few years ago to address Marco Rubio, to stop him from running for office. He was across the room, but I did share my thoughts with him. It was in the paper around that time. I don’t know if there was video, but it was definitely covered.

Have you had any communication with Planned Parenthood or the clinics that are impacted since the video blew up?

I haven’t even gotten to check my email yet, honestly. But I know some people who work at Planned Parenthood who I’ve talked to.

This new bill defunded Planned Parenthood completely in the state of Florida, right?

Not completely. But what it did was impact the funding for any provider that is in any way affiliated with abortion services. So for low-income people who benefit from what they call Title X funding, that’s basic well-woman care, family planning, HIV testing, pregnancy testing, breast exams, things like that.

In places where I live in Palm Beach County, 45 percent of low-income women get their basic reproductive healthcare—their screenings, their STD testing, their birth control—from Planned Parenthood. This bill basically forces all those people to find a different provider. But in some parts of the state, there aren’t other providers. Or the other providers don’t offer the same quality of care or the same services.

So just to be clear, now the state of Florida won’t let women on Medicaid go to Planned Parenthood—is that how it works?

Right. Correct. It doesn’t even have to mean that there are abortion services at that clinic. Just because the clinic’s care is provided by Planned Parenthood and Planned Parenthood offers abortion in other places, it makes it so you can no longer go there at all and have it be covered if you’re low-income. It’s really too bad that the governor telling me to go to the county health clinic wasn’t on video, too. He thinks he has the authority to dictate where women go to get their mammograms. It doesn’t matter to him that the county health clinic doesn’t provide care that’s as good as Planned Parenthood.

Amazing. Is there anything else you wish you had said to him but didn’t have a chance to?

The governor is so egregious, the list of things to bring up about him is very long. From environmental policy, to the brutal number of executions in this state under his authority, to the lack of voting-rights restorations that is on his shoulders. We’re fighting fracking bills that he was expected to support if they had gotten to his desk. I would have liked a much longer audience with the governor to discuss a lot of the issues. But he left, so.

What else are you working on as far as activism these days?

I’m working on a few things. There’s an effort to stop a new federal max prison construction in Kentucky that they’re trying to build on a mountaintop-removal coal mining site. There’s going to be a convergence in D.C. in June to push the BPA to stop building these federal prisons and finally commit to reducing mass incarceration.

I’m working on some local issues, too, around development and environmental issues where I live.

What’s so incredible about this viral video is that so many people seem to agree really strongly with you. I haven’t seen a single person opposing what you said on social media—it’s all applause.

Isn’t that incredible? Sometimes you just don’t wanna read the comments…but the comments here, I’ve been blown away. I think it speaks to the fact that while politicians across the country are trying to defund Planned Parenthood, there’s actually massive public support for groups like Planned Parenthood. Not just good access to healthcare, but also recognizing that safe access to abortion is a basic healthcare issue for women. Because the other part of this bill creates really horrible obstacles for abortion clinics, it’s not just about cutting Medicaid access.

Some people—including people in my family—have messaged me and said, “Look, I don’t support public funds for abortion.” But they’ve been really misled. We’re not talking just about public funds for abortion. We’re talking about a woman’s right to choose where she gets her mammogram. And if Planned Parenthood provides the best medical service, then we should have the right to go there. These laws that are being pushed by right-wing think tanks are hurting our basic access.