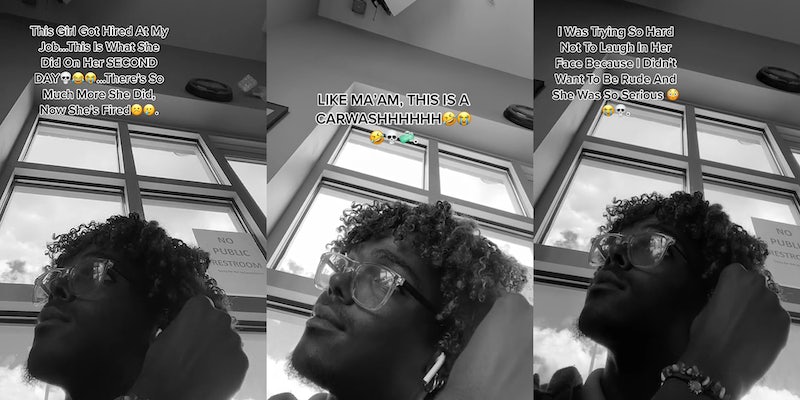 ‘She got fired for having fun at work?’: Car wash worker films new co-worker singing Drake at top of her lungs, says she was fired

'She got comfortable quick.'

TikToker @harpleeofficial went viral with a post that clocked in over 83,000 likes and 514,000 views where he records himself stifling laughter as a co-worker sings aloud to Drake. He says in the TikTok that this was only the woman’s second day working at the car wash he’s also employed at, and that her behavior ultimately got her fired.

He’s previously posted about other things that have happened at his job, like his manager falling down in the car wash pit, however users on the popular social media platform were captivated by this woman’s singing, along with stories he shared in the comments section about the way she conducted herself while on the job.

@theeharpofficial I cannot make this up yall, like the most wildest stuff happens at a car wash😭😭😭💀. #funny #drake #foryou #theeharpofficial #viral #fyp #clb #certifiedloverboy #carwash ♬ Love You So – The King Khan & BBQ Show

“This girl got hired at my job…this is what she did on her SECOND DAY…there’s so much more she did, now she’s fired. I was trying so hard not to laugh in her face because I didn’t want to be rude and she was so serious. I started dying inside I had to SHAKE. Tears forming. Like MA’AM THIS IS A CARWASHHHHH…oooooop.”

The TikToker wrote in a caption for the video: “I cannot make this up yall, like the most wildest stuff happens at a car wash.”

In the comments section other users on the platform expressed shock and disbelief that an employer would fire someone simply for singing on the job, however, @theeharpofficial clarified that there were other reasons that led to the woman’s termination.

According to him, the reason she was let go had more to do with her on-the-job behavior and how she dealt with customers than her decision to belt out tunes in honor of the Champagne Papi himself.

“It deleted the explanation but she wasn’t fired because she was singing. She cussed out another employee who trying to help her…Brought her dog to work without a leash, called another worker cause his longboard was black and he’s not. Asked for two weeks off on her 2nd day”

@theeharpofficial went on to say that the woman exhibited some signs of being paranoid that she was being followed by folks: “Andddd said men in vans were following her, telling customers the wrong information knowing it was wrong! A lot!!”

The TikToker went on to add that while she was singing, she was “banging” on the table while singing, which explains the clapping noises off camera.

Some praised the man for not laughing during her “serious” singing session, while some said that they “envied” the woman for feeling so free to express herself in any way that she feels, even if it meant being ridiculed on social media for it. Comments included:

“She got comfortable quick I am weakkk.”

“You’re stronger than me because I definitely would’ve been in there laughing.”

“I envy people like her cause my anxiety won’t even let me exist in peace.”

There were other commenters who expressed that they prefer to work the same shifts as employees like the one @theharplee uploaded, presumably because it makes living on the job a much more enjoyable experience:

“THATS MY TYPE OF COWORKERS.”

“You better than me I fold under pressure when it comes to laughing so yea I would’ve been crying laughing non stop for like 5 mins.”

Even though @theeharpofficial said he couldn’t help but laugh at his now-former co-worker’s behavior, he was disappointed to see her go.

“Yea its actually sad cause i liked her, but everyone else felt she wasnt fit for the job”

The Daily Dot has reached out to @theeharpofficial via TikTok comment for more information.