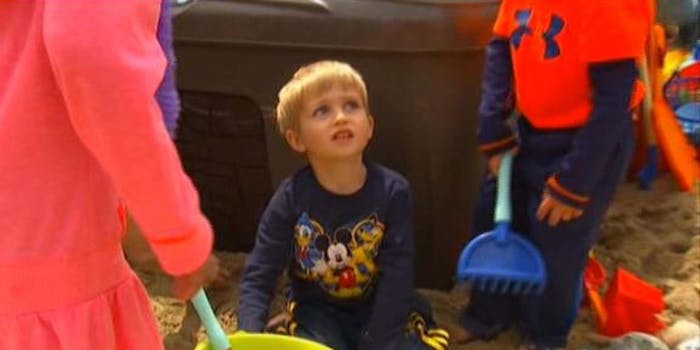 He wasn't well enough to travel to the beach, so they brought the beach to him.

A little boy with cancer dreamed of going to the beach. But when his health prevented him from traveling, the beach was brought to him.

Chad Carr is a 4-year-old from Ann Arbor, Mich., who is suffering from diffuse intrinsic pontine glioma, a rare brain tumor. He was diagnosed in September, and an organization called Friends Are By Your Side wanted to grant him a very special wish.

His original wish was to go to Sanibel Island, Fla., to hang out at the beach and collect shells with his family. However, it became clear the trip would be too strenuous for him. His mom, Tammi, let the organization know.

Martino Cartier, founder of A Night of Wigs and Wishes, decided to step in and make things right for Chad.

“…when his mom said he wasn’t well enough, he sent me a little video saying he wanted a hot tub, so I thought, well, if we can’t take him to the beach we’ll bring the beach to him,” Cartier told Fox News.

Cartier and friends brought in shovels, buckets, a hot tub, and whole lot of sand to Carr’s backyard to create the perfect beach day.

“I seriously cannot believe that he pulled this off,” Tammi Curtis Carr told Fox News of Cartier’s efforts. “I got to see Chad’s face and how excited he was when he saw everything. He had the combination of all of his wishes. The beach, shells, a hot tub, and he loves bubbles.”

Chad’s even has his own hashtag, #ChadTough, and the ChadTough Foundation has been established to raise money for research on childhood brain tumors.