Samantha Jackson and Farzin Yousefian sacrificed their big wedding for a big cause.

The monumental impact of the Syrian refugee crisis has reached North American shores and one Canadian couple was so moved that they elected to cancel their wedding to help with the relief effort.

Samantha Jackson and Farzin Yousefian planned on having a big wedding bash in March of 2016. But the now-iconic photo of the body of three-year-old Alan Kurdi, who drowned along with some family members, trying to flee to Europe, gave them pause.

“We know that many Syrians are forced to make extraordinarily difficult decisions for themselves and their family,” Jackson told the Daily Dot in an email. “We could not begin to imagine what that might be like, but with the incredible privilege we have in Canada as well as our knowledge of the crisis, we knew we could not fail to act.”

Jackson is a PhD student at Ryerson University in Toronto, one of the schools participating in the Lifeline Syria Challenge. The goal of the challenge is to bring approximately 1,000 refugees to the Greater Toronto area over the next two years and the Ryerson goal is 75 families (or 300 people total.)

When Jackson and Yousefian first decided to cancel their fancy nuptials on lieu of a City Hall wedding and fundraiser reception this October, their goal was to raise $27,000—the cost of bringing one family to Canada. But after receiving a flurry of recent press, the couple has more than exceeded their goal. As of Monday evening, they’d raised $41,000 and are hoping to now sponsor two families. 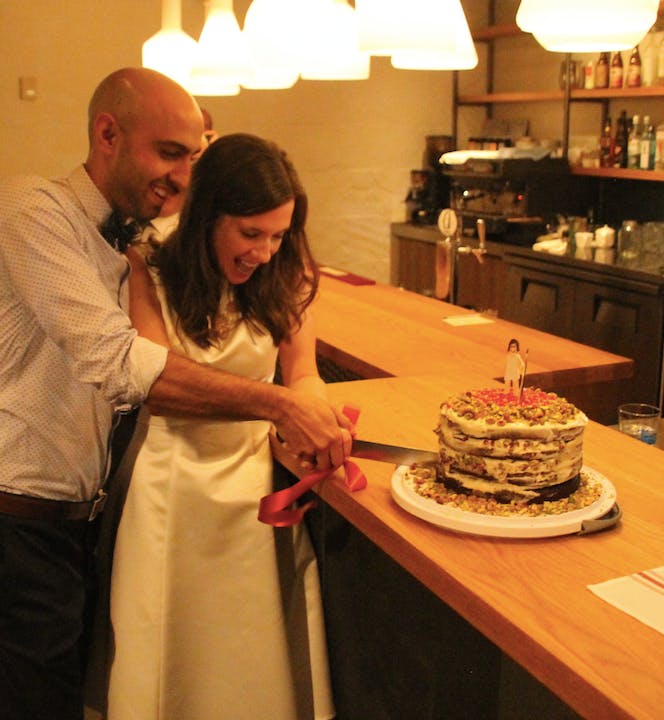 “The message we are receiving from Canadians is that refugees are welcome here,” Jackson said. “People are calling for a humanitarian response to a humanitarian crisis. We are receiving an incredible show of support from people around the globe, including Americans, asking how they can get involved and contribute to the cause. It has been overwhelmingly positive and we hope to see the momentum going!”

Jackson noted that “welcoming refugees is in Canada’s DNA; it is a part of our national identity and we knew we would have the support of those around us.” But her earlier comment about “including Americans” is perhaps a not-so-subtle allusion to the widespread anti-refugee sentiment that has seized some in the United States in the days following the ISIS massacre in Paris.

The Paris attacks left 130 dead, hundreds more wounded, and empowered American politicians to use xenophobic rhetoric to successfully convince citizens that allowing the refugees into the country would be akin to welcoming terrorists.

“We have no idea who they are. We have no idea where they come from. And I’m just telling you right now, they may come in, through the weakness of Obama, but they’re going out if I become president,” presidential candidate Donald Trump recently said on CNN. “They will not stay here. They are going back to Syria, whether it’s safe zones or whatever.”

Trump also said he would “absolutely” register all Muslims in a database and said he’d consider closing down American mosques to avoid harboring potential terrorists.

Other politicians, like the governors of dozens of U.S. states, have sent a clear message to Syrians by saying they would not be welcome or allowed to seek refuge in their states.

But for Jackson, Yousefian, and the other Lifeline Syria volunteers, their message is clear: you are are welcome here. And the newlyweds’ say their change of plans was the right one.

“We have no regrets about our change in plans!” Jackson said. “We feel so privileged to be able to come together with our friends and family to contribute to a cause much greater than ourselves. It was truly our ideal wedding.”