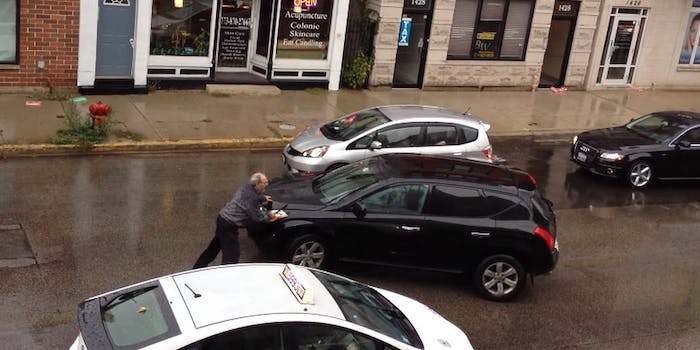 This SUV driver messed with the wrong cabbie.

Have you ever witnessed a scene straight out of Grand Theft Auto?

YouTube user K Moore certainly did, when he filmed the world’s absolute worst hit-and-run accident from his window overlooking Chicago’s busy Belmont Avenue. After an SUV was involved in an accident with a taxi, and its driver tried to flee the scene, the cabbie went berserk.

He jumped out of his car brandishing an unidentified weapon and chased the SUV on foot—he even got in a few good hits—before it sped away, smashing into the cab and three other cars in the process.

Since its Nov. 1 upload, the action-packed accident footage has registered more than 74,000 views on YouTube. Naturally, the comments section also saw an influx of armchair lawyers arguing whether the SUV was truly at fault, or whether the cabbie’s reaction crossed the line into illegal territory.

According to the Chicago Tribune, the SUV had been stolen, and police eventually caught up to its 19-year-old driver. He was charged with a series of misdemeanors, including leaving the scene of an accident and, of course, reckless driving.