A director at the beer's ad agency tweeted a photo of the controversial label.

Bud Light debuted its “Up For Whatever” campaign at the Super Bowl in 2014. But now it seems the company might have gone a step too far with the YOLO spirit with the introduction of new bottle labels, which are, shall we say, a bit on the rape-y side.

A photo of the label was tweeted by Lucy Leiderman, director of digital strategy and analytics at BBDO, the ad agency responsible for Bud Light’s creative ads. (Leiderman was quick to point out that the agency is not responsible for the beer’s packaging.)

Her tweet has since been deleted, but it read: “Oh no. Bud Light’s new tagline: “The perfect beer for removing ‘no’ from your vocabulary for the night,” with the photo below. 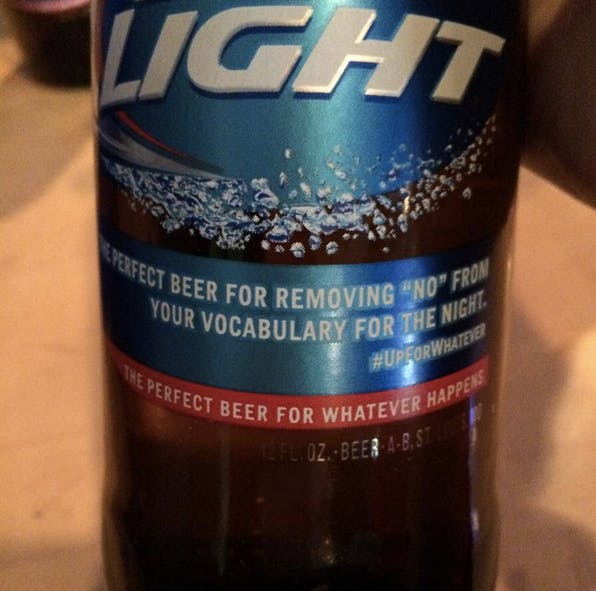 Although some speculated that the Bud Light label was a hoax, Leiderman confirmed in a follow-up comment on the tweet thread that the label was not Photoshopped.

We missed the mark on a new Bud Light bottle, and we regret it. Full statement: http://t.co/kED6HF0S7y

@Adweek It’s clear that this message missed the mark, and we regret it. We would never condone disrespectful or irresponsible behavior.

Considering that rape culture is at the forefront of the cultural conversation, especially on college campuses where Bud Light is constantly flowing, the slogan seems like a particularly egregious misstep on Anheuser Busch’s part. It’s especially offensive in light of Budweiser’s recent ad campaigns, which focus on the need to drink responsibly.