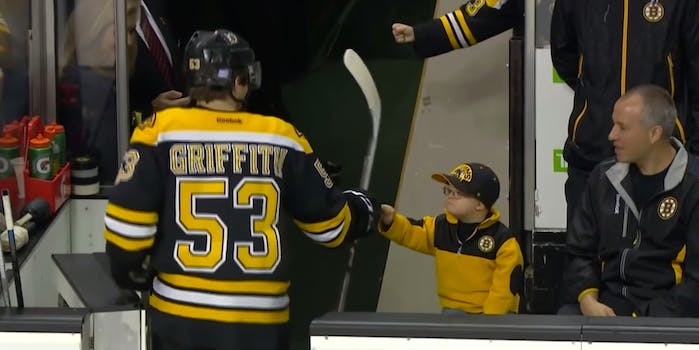 He's even melting the hearts of bitter sports rivals.

It’s the little things that count.

Fans regularly watch their hockey team warm up on the ice. But one young Boston Bruins fan, it was that small moment of interaction that came afterwards that he was waiting for. He had the perfect spot before the Nov. 4 game, and he and some other fans perched next to the locker room entrance had their fists at the ready.

In a move that can even warm the hearts of Montreal Canadiens fans, the Bruins all returned the bump. Some had a gentle tap, but at least one player managed to show off some affection for the team’s young supporter.

And from what it sounds like, the kid’s just as charming as he appears.

“I was at that game and that kid got put up on the jumbotron as ‘Fan of the Game,’” commenter kbarnett514 wrote. “Proceeded to blow kisses to the entire crowd. What a G.”