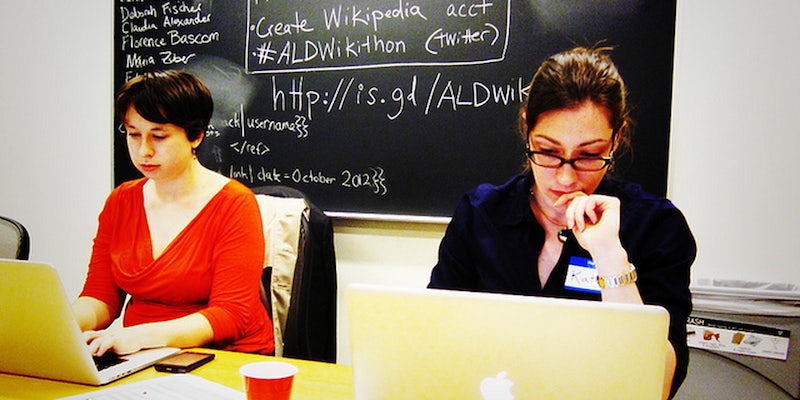 Brown University will host a five-and-a-half-hour “edit-a-thon" to represent women in science.

Wikipedia’s been struggling with its gender imbalance for years, and women currently make up only about 10 percent of the site’s editors. In September, a group of more than a dozen universities banded together to offer classes for women on how to “storm” Wikipedia. On Oct. 15, Brown University will host a five-and-a-half-hour “edit-a-thon” to attempt to correct this imbalance.

It’s being touted as an editing party in honor of pioneering programmer Ada Lovelace, and aims to raise the profile of women in tech, math, engineering, and science. The event is the brainchild of journalist and Brown grad Maia Weinstock, and her former professor, Anne Fausto-Sterling, who’ve organized edit parties in the past. It’s a flash mob of sorts, but for info.

Anyone can join in the edit party, learn how to edit a Wikipedia article, and get familair with the language; if you’re not in or near Rhode Island, you can still edit remotely. Fausto-Sterling says this is important not just for the current generation of women in science and tech, but future ones as well:

What we lose by not having a full panoply of information about women scientists is that we continue to perpetuate this idea that this historian had that women haven’t done science at the same level as men or are somehow deficient in this area.

If Wikipedia wants to be a universal reference, it has to represent the other half of the population. There’s still time to rewrite our history.